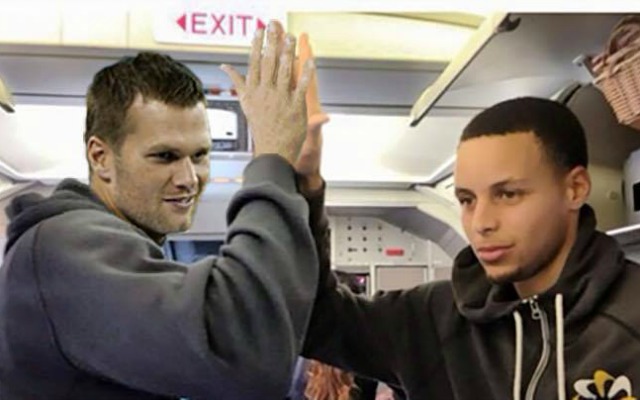 Even in the midst of a rejuvenation of the Deflate-gate scandal, New England Patriots quarterback Tom Brady isn’t afraid to take to social media to make fun of himself.

Playing the “I don’t get a high-five from teammates” card, Brady decided his use of praise was best served for Golden State Warriors guard and NBA MVP Stephen Curry.

There are still a couple unanswered questions here.

Does Brady’s new mysterious “relationship” with Curry indict the latter in a potential deflate scandal around the association? After all, we’ve already had one similar instance this year.

Though, I am not too sure how a deflated ball would help Curry deflate the confidence of opposing teams like he did this year (burn). The second thing that comes to mind is rather simple. Did Brady really have to resort to giving a high-five to a basketball player that suits up on the other side of the nation? If so, that’s pretty sad.

In any event, and on a bit more serious note, it’s pretty cool to see Brady take to social media to kid around when the proverbial crap appears to be hitting the fan. No one can question this guy’s personality.