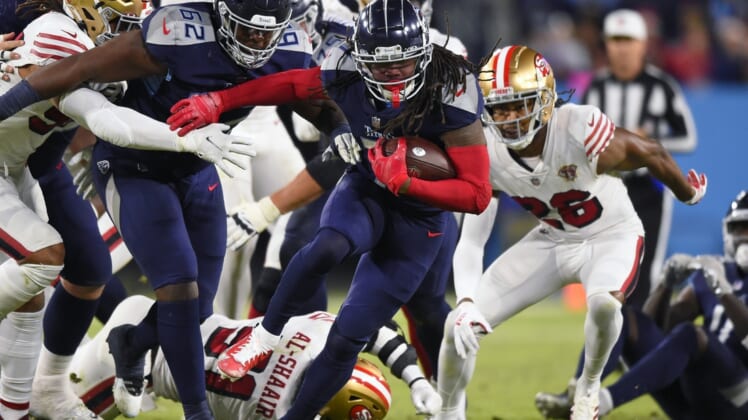 Randy Bullock kicked a 44-yard field goal just inside the left upright with four seconds remaining as the Tennessee Titans rallied to a 20-17 victory over the San Francisco 49ers on Thursday night in Nashville, Tenn.

Jimmy Garoppolo completed 26 of 35 passes for 322 yards, one touchdown and two interceptions for San Francisco (8-7), which lost for just the second time in the past seven games.

Deebo Samuel matched his season best of nine receptions while accumulating 159 receiving yards for the 49ers. Jeff Wilson Jr. rushed for a touchdown and Brandon Aiyuk caught a scoring pass for San Francisco, which blew an early 10-point lead.

Bullock’s decisive kick was his third of the season. He also had winners against Seattle in Week 2 and Indianapolis in Week 8.

Tennessee took its first lead of the game at 17-10 when Tannehill tossed an 18-yard scoring pass to Brown with 13:02 left in the game. Brown was activated earlier in the day after missing three games with a chest injury.

The 49ers tied the score with 2:20 left on Garoppolo’s 2-yard scoring pass to Aiyuk. The touchdown was set up by Samuel’s 56-yard catch and run to the Tennessee 6-yard line.

Tennessee trailed 10-0 at halftime before opening the second half with a 13-play, 55-yard drive. Bullock capped it with a 38-yard field goal with 8:45 left in the third quarter.

Garoppolo followed with a high throw on San Francisco’s next offensive play and Amani Hooker intercepted it and returned the ball 21 yards to the 49ers’ 18-yard line. Four plays later, D’Onta Foreman powered in from the 3 to knot the score at 10.

The 49ers navigated 75 yards on nine plays on the game’s first drive, with Wilson scoring from the 1 with 9:57 left in the quarter.
San Francisco increased its lead to 10 when Robbie Gould booted a 48-yard field goal with 8:31 left in the half.