Minnesota Timberwolves get off the schneid with win over Pelicans 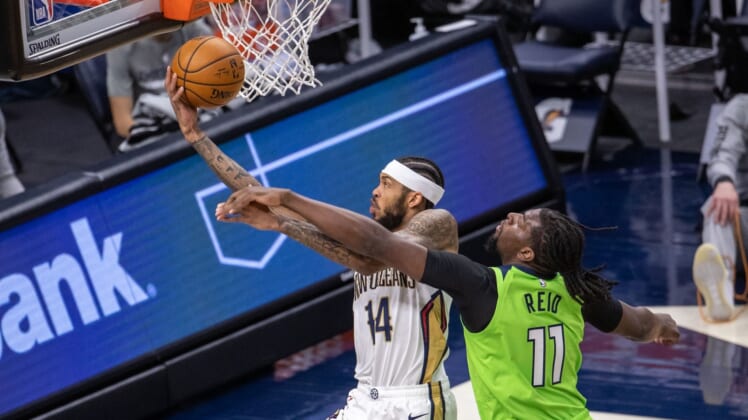 Anthony Edwards added 18 points, Jarred Vanderbilt had 16 points and 11 rebounds, Jarrett Culver and Malik Beasley scored 16 each and Jordan McLaughlin had 11 as the Timberwolves won for just the second time in 13 games.

Minnesota entered the game with the worst record in the Western Conference and had scored fewer than 99 points in four of its last five games, including a 116-98 home loss to Atlanta on Friday.

The Timberwolves played Saturday without Karl-Anthony Towns and Juancho Hernangomez, who are sidelined because of COVID protocols, and D’Angelo Russell, who was resting.

Minnesota outscored New Orleans 57-46 in the second half.

The Pelicans led by one point at halftime, but the Wolves began the third quarter with a 16-5 run to take a 79-69 lead.

New Orleans went more than four minutes without making a field goal before Bledsoe made a layup.

Culver answered with a 3-pointer and Minnesota led by as many as 13 points before the Pelicans got within 87-78 at the end of the third quarter.

McLaughlin made the first two baskets of the fourth quarter and Edwards made the third as the Wolves extended their lead to 93-78.

The Pelicans shot 73.7 percent and the Wolves shot 39.3 percent as New Orleans took a 31-28 lead after one quarter. Ingram led the way with 12 points, making 6 of 8 field goals.

Minnesota tied the score twice in the second quarter before taking a 50-49 lead on Vanderbilt’s dunk.

Bledsoe made a jumper with one second remaining to give the Pelicans a 64-63 halftime lead.