Former NFL quarterback and Heisman winner Tim Tebow is definitely a divisive figure around the world of professional sports.

His inability to do anything of substance on the game’s grandest stage after the Denver Broncos made him a surprise first-round pick back in 2010 led to many calling him a bust.

Tebow’s willingness to wear his faith on his sleeve also led to a split between those who supported him and those who believed the football field wasn’t a place for religion.

No matter where we stand on those topics, we can all agree that Tebow has acted the part of an altruistic individual off the field.

That came out in droves during the weekend when the much-maligned quarterback reportedly comforted the family of a man that suffered a heart attack on a flight.

According to ABC News, Tebow joined with other passengers and the flight crew to attend to a medical emergency that included a man collapsing to the ground.

This is where the story gets interesting.

“When passengers and crew rushed to help, a familiar face was among them: NFL quarterback and Heisman Trophy winner Tim Tebow,” the ABC News report read. “Tebow moved toward the unconscious man and his family, then led a group of passengers in prayer, according to passenger Richard Gotti.” 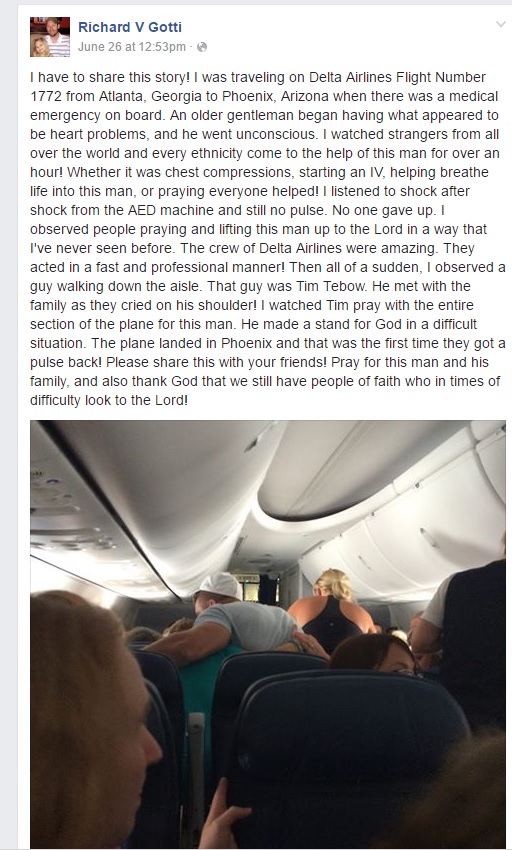 The passenger reportedly regained consciousness after the plane landed, leaving some to believe that Tebow’s prayer had worked.

Regardless, this is yet another example of a person that has continued to show support and understanding for others during what has been an off-field life filled with community action.

Tebow, 28, last played a regular season snap in the NFL with the New York Jets back in 2012.