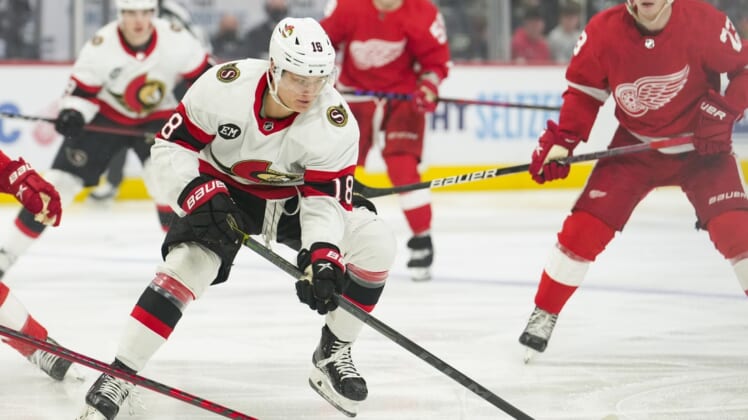 Tim Stutzle had two empty-net goals and an assist to lead the Ottawa Senators to a 4-1 road win over the Detroit Red Wings on Tuesday.

Austin Watson added a goal and an assist and Drake Batherson also scored for Ottawa (27-40-6, 60 points), which snapped a three-game overall losing streak and swept the three-game season series with the Red Wings. Anton Forsberg made 24 saves for the victory.

Ottawa opened the scoring with 4.3 seconds remaining in the first period. Watson took a pass from Josh Norris and fired a shot from right faceoff circle that went underneath the crossbar and into the net.

Detroit tied the game at 1-1 with 7:33 remaining in the second period on a power-play goal by Bertuzzi. Moritz Seider fired a shot from the point that went behind the net and caromed off of the boards to Bertuzzi, who fired the puck into a half-open net.

Ottawa regained the lead a short time later, going up 2-1 with 4:28 left in the second when Batherson redirected Michael Del Zotto’s shot from the point into the goal.

With 1:30 remaining in the game, Detroit pulled Greiss and held some pressure in the Ottawa zone.

However, Stutzle chipped the puck out of the Detroit zone, raced down the ice and put the puck into the empty net to give the Senators a 3-1 lead with 1:05 left to all but wrap up the game.

Stuzle then added another empty-netter with 13.7 seconds remaining to finish off the scoring.

Detroit went 1-for-4 on the power play and outhit Ottawa 49-33. The Senators failed to score on both of their power-play attempts.