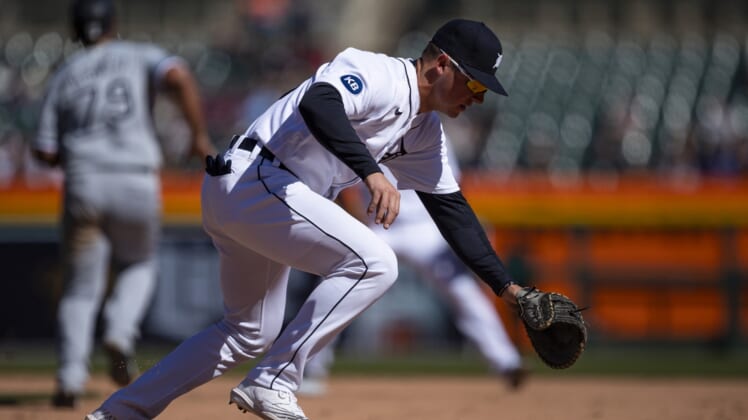 The Detroit Tigers received a reminder the past two games of how much progress they need to make before challenging for a division title.

They’ll step out of their division but remain at home for their second three-game series of the young season. Detroit will host the Boston Red Sox, beginning with a late afternoon start on Monday.

Detroit opened the season with a 5-4 win over the Chicago White Sox following a two-run rally in the ninth inning. The White Sox, who ran away with the American League Central in 2021, answered with a 5-2 victory on Saturday and a 10-1 rout the following day.

“This is one series of a long journey,” manager A.J. Hinch said after his team was held to two hits on Sunday.

Chicago scored two runs in the first and third innings before blowing the game open with four in the seventh. Other than Victor Reyes’ RBI triple, Detroit offered no resistance.

“We were behind from the get-go and I think our at-bats, quite honestly, just got a little bit rushed as the game went along,” Hinch said. “They came through our lineup a couple of different times and they pitched with a little bit more aggressiveness than we were ready for. When we fell behind, it looked like our at-bats got over quickly.”

The Tigers, who made several moves to improve their defense during the offseason, also were sloppy in the field. Not only did they make two errors but a bloop hit fell between four defenders in center field during the ninth inning when no one took charge.

“There’s no good way to describe a loss,” Hinch said. “We’ll flush this one and get to Boston. I’m not going to obsess over it, other than we need to address a few things. It got a little bit ugly but losing 2-1 would have been ugly, too.”

Right-hander Matt Manning will make his season debut. He was rushed to the majors last season due to injuries and wound up making 18 starts. He had a 4-7 record and 5.80 ERA.

Manning will be facing the Red Sox for the first time. He pitched 12 1/3 innings in four spring starts and posted a 3.65 ERA.

Boston will counter with right-hander Michael Wacha, who was signed to a one-year contract as a free agent during the offseason. Wacha pitched for Eastern Division rival Tampa Bay last season and wound up with a 3-5 record and 5.05 ERA in 30 games, including 23 starts.

Wacha, who spent the bulk of his career with St. Louis, has only faced Detroit once. He gave up one run in five innings in that outing.

In his last spring start, Wacha surrendered six runs (all earned) on six hits, including three homers, in four innings.

“I just felt like my mechanics were just kind of a little out of sorts,” Wacha said.

Second baseman Trevor Story missed the series finale against the New York Yankees on Sunday night with an illness.

“I think it’s one of those 24-hour flus, but he got tested and everything is fine. So he either travels with us tonight or by himself tomorrow but as far as like, COVID, he’s (tested negative),” Red Sox manager Alex Cora said after a 4-3 win.

Boston salvaged the finale of the series despite being limited to five hits.