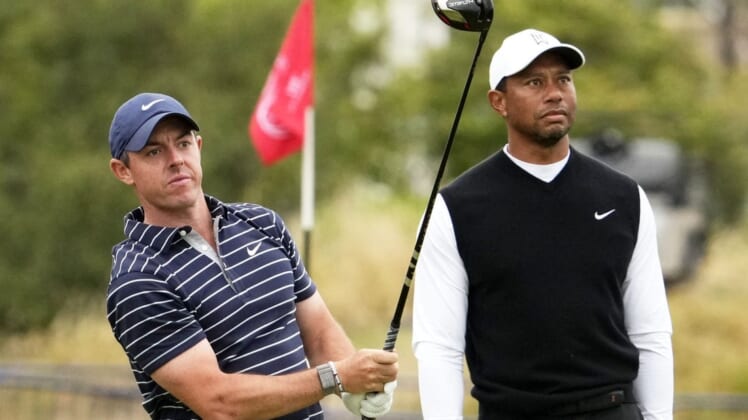 Tiger Woods and Rory McIlroy unveiled a technology-focused golf league in partnership with the PGA Tour that will feature players competing on six three-man teams.

Woods and former Golf Channel president Mike McCarley, who has partnered with Woods to form TMRW Sports, outlined the startup that will combine virtual technology and a green complex at a custom-built venue.

The new league, TGL, will begin in January 2024 and have teams compete in 18-hole matches during 15 regular-season events, with the top four teams advancing to the playoffs. The contests will take place in prime time on Monday nights.

“We’ve been working on this for two years,” McIlroy said. “I think it’s a great opportunity for PGA Tour players to show a different side of themselves, prime time on Monday night. I think it’s great for brand exposure to try to engage a different audience.”

McIlroy also said Woods plans to compete in the matches. That, in itself, is a victory in the eyes of McIlroy, considering Woods has only competed in three tournaments this season while recovering from injuries sustained in a car accident outside Los Angeles in February 2021.

“Who knows where we’re going to see Tiger Woods play golf next, right?” McIlroy said. “We don’t know what his schedule is going to be. We don’t know how his body is going to be. But to be able to see him still showcase his skills on prime time, on TV without really any wear and tear on his body, I think to be able to see Tiger hit golf shots and still sort of provide people with a glimpse of his genius — I think it is a really good use of his time.”

Woods said in a statement that he is looking forward to giving a fans a different look at the sport.

“Embracing technology to create this unique environment gives us the ability to move our sport into prime time on a consistent basis alongside so many of sports’ biggest events,” Woods said. “As a big sports fan myself, I’m excited about blending golf with technology and team elements common in other sports.

“We all know what it’s like to be in a football stadium or a basketball arena where you can watch every play, every minute of action unfold right in front of you. It’s something that inherently isn’t possible in traditional golf — and an aspect of TGL that will set it apart and appeal to a new generation of fans.”