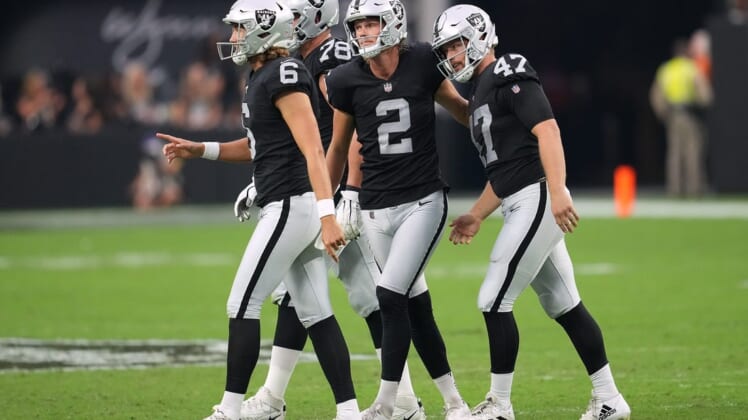 Three quarterbacks combined to throw for 181 yards on 19-for-27 passing to lead the Las Vegas Raiders to a 26-20 preseason win over the Minnesota Vikings on Sunday in Paradise, Nev.

Jarrett Stidham got the start under center for Las Vegas, completing 10 of 15 passes for 68 yards. He also added a rushing touchdown before turning things over to Nick Mullens, who threw for 94 yards and a touchdown to give the Raiders a 16-6 lead early in the third quarter. Chase Garbers finished things off, going 2 of 3 for 19 yards.

Minnesota utilized just two quarterbacks, with Sean Mannion starting the game but Kellen Mond the more productive of the pair. Mond racked up 119 passing yards and two touchdowns on 9-for-14 passing. Albert Wilson was on the receiving end of both scores, hauling in a 2-yard catch in the third quarter before finding the end zone from 20 yards out in the fourth.

The Vikings pulled within three on Wilson’s first touchdown, but Las Vegas rookie running back Brittain Brown scored a 1-yard rushing touchdown and Daniel Carlson put a 47-yard field goal through the uprights to give the Raiders a 13-point lead that the Vikings couldn’t come back from.