Threat to the throne? Alabama narrow favorite to win SEC 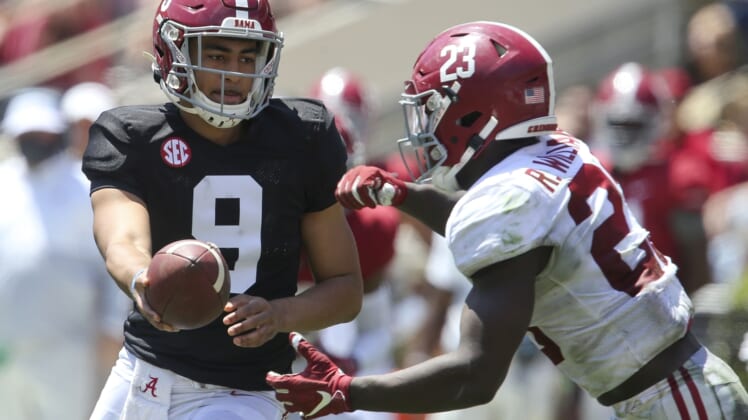 Reloading is an annual rite of spring at Alabama, but the Crimson Tide could be in for a dogfight in the SEC next season.

The reigning national champions are again faced with replacing a bevy of stars lost to the upcoming NFL draft. Alabama’s spring game was attended by 47,218 fans on Saturday, and three days later the Crimson Tide were installed as +100 favorites by DraftKings to win the SEC title in 2021.

That is slightly ahead of Georgia at +250. The SEC powerhouses don’t face each other during the regular season, which could potentially set up a marquee showdown in the conference championship game.

DraftKings released markets for each of the Power 5 conferences Tuesday, with Ohio State (-110) a massive favorite to win the Big Ten ahead of Michigan and Penn State at +700 and Clemson (-835) an even bigger favorite to emerge from the ACC ahead of North Carolina (+700).

Oklahoma has been installed as the -125 favorite to win the Big 12 with Heisman Trophy favorite Spencer Rattler leading the Sooners’ offense. Iowa State has the second-shortest odds at +250, slightly ahead of Texas (+350) in coach Steve Sarkisian’s first season in Austin.

Rattler is the current Heisman Trophy frontrunner at +550 by DraftKings. That’s narrowly ahead of D.J. Uiagalelei (+600), who takes over the quarterback reins at Clemson from Trevor Lawrence.

Projected Alabama starting quarterback Bryce Young is next at +800, followed by North Carolina quarterback Sam Howell (+1700). Georgia’s JT Daniels and Miami’s D’Eriq King are being offered at +2000 along with Texas running back Bijan Robinson, who has the shortest odds among non-quarterbacks.