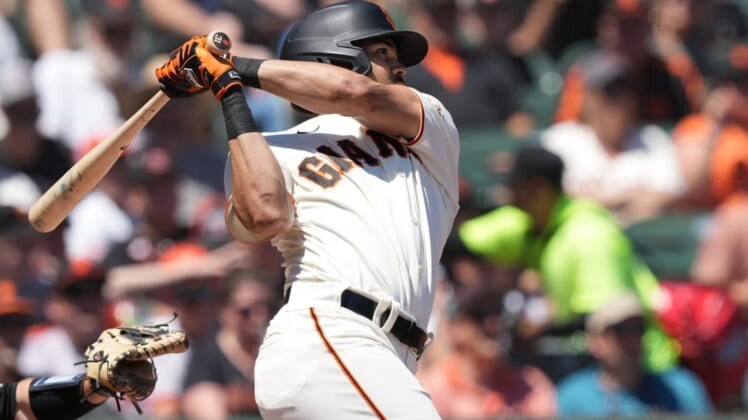 Thairo Estrada crushed a two-run, walk-off home run to center field with one out in the ninth inning Sunday afternoon, allowing the host San Francisco Giants to overcome a huge game by the Pittsburgh Pirates’ Bryan Reynolds for an 8-7 victory.

Reynolds had a two-run double and a three-run homer in a Pirates comeback, then raced home from second base on Evan Longoria’s throwing error with one out in the top of the ninth to put Pittsburgh up 7-6.

But Longoria led off the bottom of the ninth with a single and, after Mike Yastrzemski forced his teammate at second with a fielder’s choice grounder, Estrada launched his 11th home run of the season off Wil Crowe (4-7) for the Giants’ sixth walk-off win of the season.

Camilo Doval (4-5), who allowed the unearned run in the top of the ninth that put the Giants in a one-run hole, was credited with the win.

The Giants appeared well on their way to a three-game sweep before the Pirates, thanks to Reynolds, rallied for three runs in the fifth and three more in the seventh to take a lead after having trailed 5-0.

Reynolds’ two-run double off Giants starter Alex Wood highlighted the fifth-inning uprising, during which the visitors got within 5-3.

His three-run homer, his 17th of the season, followed a walk to Jason Delay and an infield single by Kevin Newman to open the seventh against Giants reliever John Brebbia.

The five-RBI game missed his career-high by one, that having come in a three-homer explosion against the Washington Nationals in June. He also finished with three hits and scored three times.

The Giants drew even at 6-6 and set up the ninth-inning dramatics on a Brandon Crawford two-out, run-scoring double in the last of the seventh.

LaMonte Wade Jr.’s fourth homer in his last six starts and seventh overall this season, a three-run shot off Pirates starter Zach Thompson in the second inning, provided the highlight of the Giants’ early run to a 5-0 lead. Tommy La Stella and Wilmer Flores accounted for the other two runs with RBI doubles.

Flores had a double and two singles for the Giants, whose sweep came on the first three dates of a seven-game homestand. Estrada, Crawford and Joey Bart had two hits apiece in the Giants’ 13-hit assault.

Newman, Delay and Rodolfo Castro collected two hits apiece to join Reynolds in the multiple-hit category for the Pirates, who completed a 2-8 trip. Newman and Delay each scored twice.