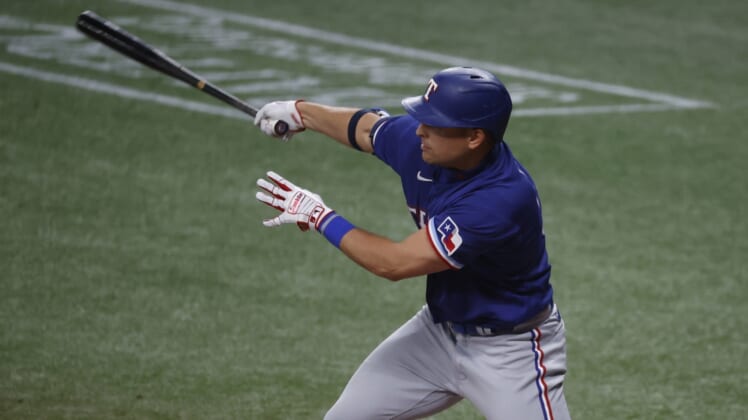 Charlie Culberson notched three hits and three RBIs, including a two-run homer, to boost the Texas Rangers to an 8-3 win Tuesday night over the Tampa Bay Rays in St. Petersburg, Fla.

Shut out in three of their last four games, including being no-hit by San Diego’s Joe Musgrove on Friday, Texas scored four runs in the fourth. Three scored on Nick Solak’s double, and Culberson’s double drove in the fourth.

Culberson’s first homer of the season came in the eighth.

Isiah Kiner-Falefa, Jose Trevino, Joey Gallo and Solak each had two hits for the Rangers, who broke their four-game losing streak and have split the first two games of the four-game series.

In his third start, Kyle Gibson (2-0) yielded two runs (one earned) and four hits in seven innings. He walked two and struck out three.

Randy Arozarena was 2-for-3 and scored twice, and Brandon Lowe and Yandy Diaz each had two hits for the Rays, who are 3-2 on their seven-game homestand.

Rays starter Ryan Yarbrough (0-2) was roughed up in six innings, surrendering six runs on 10 hits with a walk and six strikeouts, but the left-hander has not won in his last 20 starts for the Rays.

Blanked 1-0 on three hits in Monday’s series opener, Texas matched that amount in the first inning against Yarbrough, one being Gallo’s RBI single to right to take a 1-0 lead.

However, the Rays answered on Joey Wendle’s scorched double to center to plate Arozarena, who reached base after being struck by Gibson’s change-up. Second baseman Solak’s miscue on a grounder made it 2-1 as Wendle scored.

With the bases full on three singles and no outs in the fourth, Solak atoned by drilling a double into the left field corner to clear the bases. Culberson followed with an RBI double to right.

On second with two outs in the sixth, Eli White broke for third on Yarbrough, and shortstop Willy Adames moved toward the bag for a pickoff attempt. But the southpaw delivered a pitch, and Kiner-Falefa grounded an RBI single through the area just vacated by Adames.

Gibson was locked in after allowing the first inning. The right-hander gave up just two singles and two walks over the next six frames as the Rays put just one baserunner into scoring position.

Texas reliever Kolby Allard fanned the side in the ninth to ice the win.