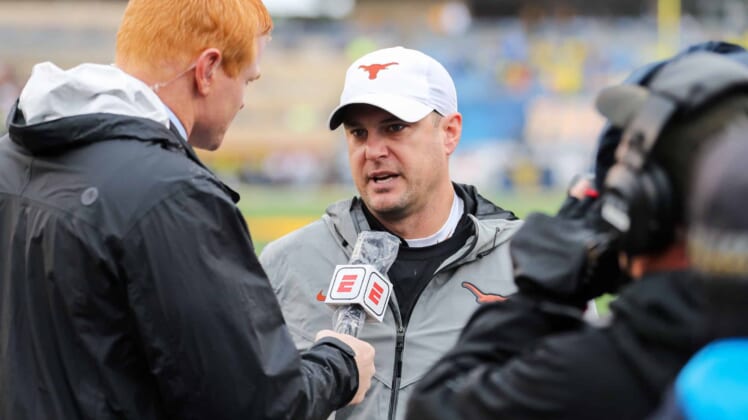 Amid one of the most tumultuous times in modern American history, many athletes are using their social media accounts to share messages of anger, hope, and fear. That type of activity doesn’t always sit well with their coaches. But Tom Herman of the Texas Longhorns isn’t on that side of the fence. Instead, he is completely behind his guys using their platforms.

In a lengthy interview with Brian Davis of the American-Statesman, Herman shared his full support for players using social media to share their messages.

“I mean, say what’s on your heart,” Herman added, stressing the point. “You’re a minority football player at one of the biggest brands in the country. You have a voice. Use it. And you know, I support them in that. So no, we haven’t told (them) anything. Post away. I think we’ve done enough in educating our guys on the pitfalls of social media in the average climate in our country.”

Herman also shared an honest personal take on not being able to relate to what it’s like to be a black athlete at Texas. When asked if he could understand, he said, “Absolutely not. No. No way.”

“I will never know, you will never know, none of us will ever know what it’s like to have that genuine fear. When I make an illegal U-turn and get pulled over, I fear about what the cost of the ticket is going to be. I don’t fear that I’m going to get dragged out of my car and maybe killed because of something I said or did. And that’s real for them.”

The Longhorns held a team meeting to discuss the current events in the nation right now. During that meeting, Herman said players’ emotions were “all over the place.”

“Some guys were were rightfully angry and wanted to vent. Some guys were more tempered in their tone and maybe more pragmatic. But, you know, it certainly ran the gamut of not only emotions, but the thoughts and ideas of how do we best unite as a team to create real change.”

Real change is something that everyone is begging for right now. Hopefully, that’s something we can all see take place in the coming days, weeks and months.