Tennessee is starting over, again, and this time Josh Heupel plans to forge a different path.

Coach leaves or is fired. Lather, rinse and repeat until your program is no longer relevant on a national stage.

That’s the path Tennessee has taken since coach Phil Fulmer was forced to resign in the middle of a 5-7 2008. When he left the program, Fulmer was 100 games over .500 and had guided the Volunteers to a 1998 national title.

Lane Kiffin, Derek Dooley, Butch Jones and Jeremy Pruitt have swung from the heels to try to duplicate Fulmer’s success since he stepped down. All have failed, leaving a once-proud program looking for the right man – again.

Heupel is the latest solution to the ongoing problem at Tennessee, which dismissed Pruitt after going from being ranked 14th after a 2-0 start in 2020 to finishing 3-7. Heupel will make his debut on Thursday night when the Volunteers host Bowling Green in Knoxville.

“I love this team’s effort and energy,” he said. “The way they’ve learned how to approach walking up the stairs and going to meetings and being consistent in those competitive behaviors that you’ve got to have … they care about representing the state the right way.”

All the question marks aside, there’s a reason the Volunteers are a 34-point favorite. Bowling Green went 0-5 in a COVID-shortened 2020 and was outscored 225-57.

They were outgained by nearly 150 total yards per game, allowing a whopping 310.2 yards per game on the ground. About the only thing they did well was commit fewer penalties. In short, they look on paper to be a perfect first game opponent for a rebuilding program such as Tennessee. 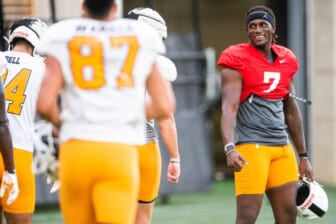 If Bowling Green is to have a shot at pulling off an upset, it will likely need quarterback Matt McDonald to show significant progress. He struggled last year, completing just 43.9 percent of his passes for 712 yards with six interceptions and just one touchdown.