Tennessee moves into No. 2 tie in AP Top 25; Georgia still on top 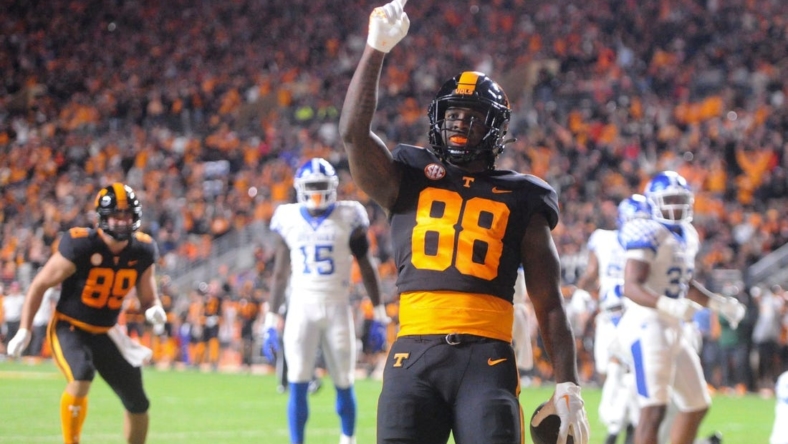 Tennessee used a convincing victory over Kentucky to move into a tie with Ohio State at No. 2 in the Associated Press Top 25 poll, released Sunday, with a showdown at No. 1 Georgia set for next weekend.

The Bulldogs held on to the top spot for the fourth straight week, earning 30 of 63 first-place votes and 1,528 points. But right on their heels are the Volunteers, who gathered 18 first-place votes, and the Buckeyes (15 votes), who are tied with 1,500 points.

The Volunteers had not reached the No. 2 spot since 2001.

No. 4 Michigan and No. 5 Clemson held their spots to round out the top five, with each team in the group standing at 8-0. They were followed by Alabama, TCU and Oregon, with USC moving up to No. 9 and UCLA to No. 10, giving the Pac-12 three teams in the top 10.

How the top 10 will shake out on Tuesday, when the first College Football Playoff rankings are released, remains to be seen.

While Liberty and UCF last were ranked in 2020, the Beavers had been absent from the regular-season Top 25 since 2012.

Dropping out of the Top 25 following losses on Saturday were Kentucky, South Carolina and Cincinnati.

The Southeastern Conference, Atlantic Coast Conference and Pac-12 each had five ranked teams.