In this new Internet world, no action from a celebrity will go unnoticed. Whether we believe Minnesota Vikings quarterback Teddy Bridgewater is actually a celebrity remains to be seen. But within the confines of the Twin Cities, he surely is.

So when Bridgewater liked a tweet sent out by former Vikings cornerback Demarcus VanDyke late Thursday night, we surely had to pay attention. The tweet in and of itself advocated for Minnesota to send Bridgewater to the Miami Dolphins.

While Teddy has since “unliked” the tweet, AJ Mansour over at KFAN in Minnesota has photo evidence. 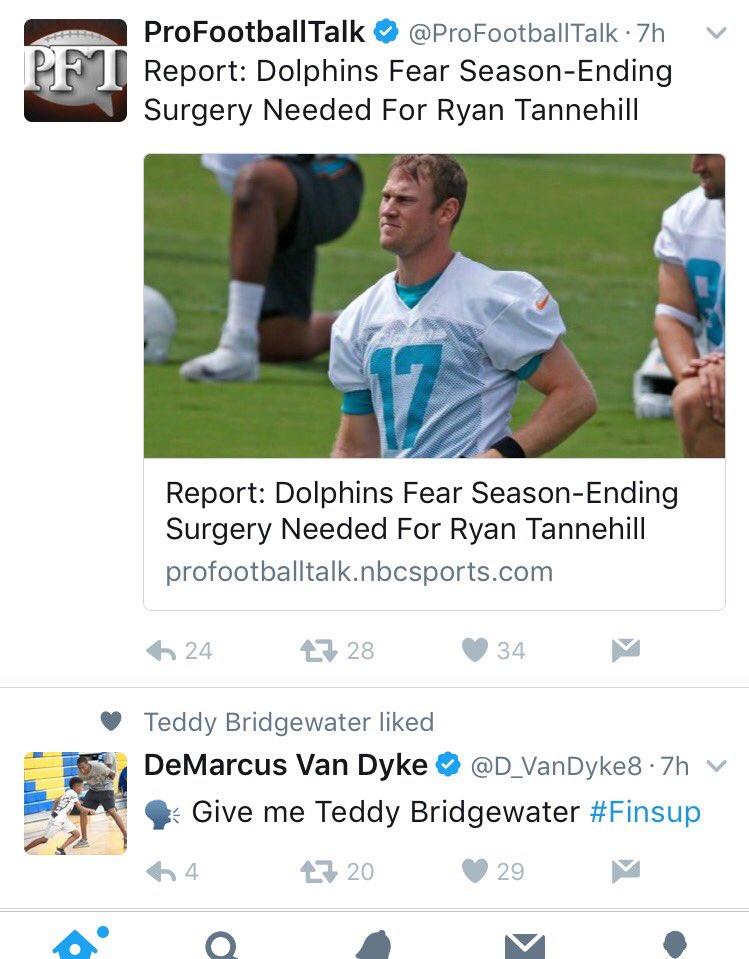 Why is this a big deal? Is it a big deal? Are we making something out of absolutely nothing?

There’s a few things to look at here. First off, the Dolphins could very well be without starting quarterback Ryan Tannehill for the entire 2017 season after he injured his knee on Thursday … hours before Bridgewater liked the aforementioned tweet. And while Miami has been primarily linked to Jay Cutler, there are other opportunities out there for the team.

Secondly, Bridgewater is seemingly stuck in a backup role behind Sam Bradford in Minnesota. The former Louisville standout injured his knee in an ugly-looking incident last summer and has yet to return to the field.

There could be some frustration over Minnesota moving on from Bridgewater, but he’s surely not ready to return to the field right now. That could potentially limit Miami’s short-term interest in Bridgewater.

Finally, Bridgewater is a native of South Beach and played football at Miami Northwestern High School. It would surely be a homecoming of sorts for him.

Yeah, it’s all fun and games on the Internet until the Internet itself makes a big ado about nothing (ourselves included). No matter how unrealistic it seems, it’s still a fun scenario to look at.