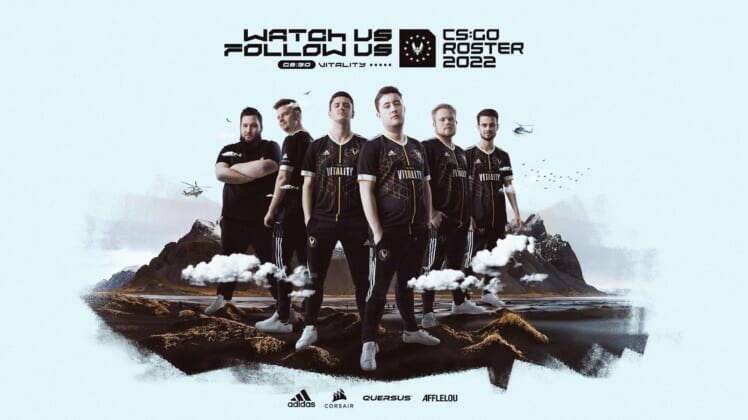 Team Vitality officially announced the addition of a trio of former Astralis stars to its CS:GO roster on Wednesday along with an investment of more than $56 million in the organization.

We're more than ready to compete at the highest level: 2022 here we are. #WatchUsFollowUs pic.twitter.com/tHJYZBJAYQ

It is the completion of an overhaul that began last month with the departure of shox, who had joined the team in a high-profile transfer in 2019, along with coach Remy “XTQZZZ” Quonian. At the time, 1pv.fr reported that Vitality had set its sights on the Danish trio of dupreeh, magisk and zonic to join its French holdovers.

dupreeh, 28, is one of only five players to have attended every CS:GO Major, including titles at the ELEAGUE Major: Atlanta 2017, FACEIT London Major 2018, IEM Katowice 2019 and StarLadder Major: Berlin 2019.

magisk, 23, was part of the team that won the $1M Intel Grand Slam, while zonic has been arguably the most successful coach in CS:GO history.

“I couldn’t be more excited to have dupreeh, magisk, and zonic join the team,” ZywOo said in a statement. “Together they have achieved so much and I know there is a lot both myself and the team can learn from them. I am so ready to show everyone how far this team can go!”

ZywOo, 21, was named HLTV.org’s player of the year for the second time. misutaaa, 18, won the Blast Premier Fall 2020 as a rookie and the 28-year-old apEX has served as team captain in addition to being a 2015 Major winner.

Vitality also announced the investment of more than $56 million from Rewired.gg. The money will be spread over the next three years “to create European super teams capable of winning the most coveted trophies in esports.”

“This scale of talent investment has never been seen in esports before and I am honoured to be leading the charge with these rosters which have the potential to make history in Europe and beyond,” said Team Vitality co-founder and esports director Fabien “Neo” Devide. “Since the beginning of our entrance into CS:GO, we have been working with intensity to get to the top and nurture some of the best talent France has to offer.

“It’s now time to think internationally and create a new CS:GO culture of European talent with legacy athletes. As proven winners, dupreeh, magisk & zonic have what it takes to move us from not just being a strong contender, but the best CS:GO team in the world.”

“With a new laser focus on performance and securing the best international talent in esports, it is Team Vitality’s goal to conquer the biggest stages of them all by being the most serious contender at Worlds and Major on the three next years,” the organization said in a statement.