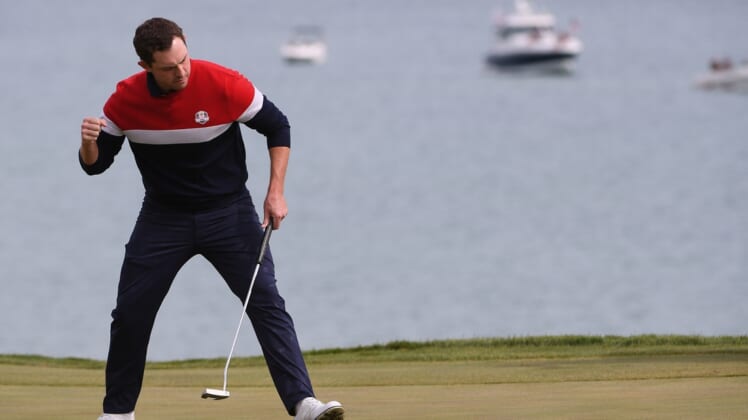 Collin Morikawa sealed the winning half-point for the United States in its dominating victory in the Ryder Cup, with the Americans clinching the outcome just five matches into Sunday’s singles play at Whistling Straits in Sheboygan, Wis.

Morikawa won the par-3 17th hole with a short birdie putt to take a one-hole lead on Viktor Hovland, meaning he would at least halve the match — all the U.S. side needed to complete the incredible three days.

The Europeans would have needed the largest final-day comeback in Ryder Cup history in order to retain the Cup. They trailed 11-5 entering the day, with the Americans needing 14 1/2 points to regain the Cup.

With Morikawa’s half-point guaranteed, that meant the margin would grow to at least 14 1/2-6.

The U.S. won the Ryder Cup for just the fourth time in the last 13 editions of the competition.

Earlier Sunday, Patrick Cantlay defeated Shane Lowry by 4 and 2 and Scottie Scheffler won over Jon Rahm, who had been the most consistent European golfer, by 4 and 3.

Bryson DeChambeau took more spirit out of the Europeans with a 3 and 2 decision against Sergio Garcia, who a day earlier became the Ryder Cup’s all-time winningest golfer with 25 victories. Garcia had been 3-0 in his action across the previous two days.

There was really no doubt by the time matches reached the midway mark Sunday, with the U.S. holding leads in four of the first five on the docket.

Even when the outcome became official, the Americans were in good shape in several other matches among the 12 singles encounters.

The U.S. team basically had it in cruise control, with Cantlay and Scheffler each winning four straight holes. Cantlay won Nos. 3-6, while Scheffler claimed the first four holes in his match.

DeChambeau also started strong, winning three of the first four holes and holding a three-hole edge after the front nine.

Europe’s Rory McIlroy won the day’s first match, topping Xander Schauffele by 3 and 2. It was McIlroy’s only point of this year’s event. Schauffele had been 3-0.