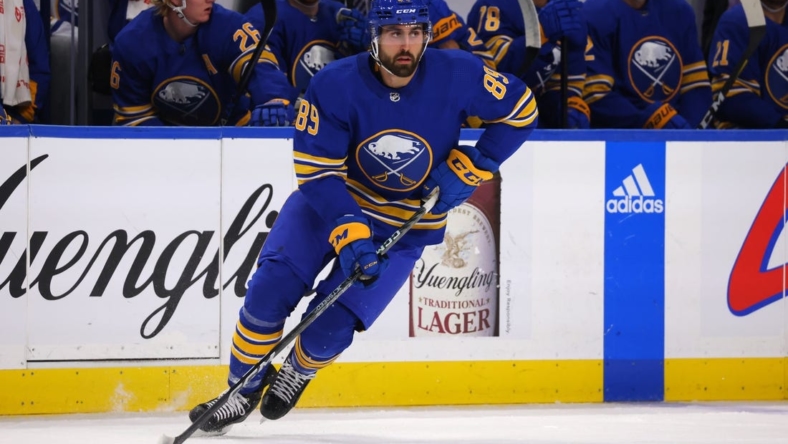 Tage Thompson recorded his second career hat trick and had three assists while Jeff Skinner scored the 300th goal of his career as the Buffalo Sabres beat the visiting Detroit Red Wings 8-3 on Monday night.

Thompson has posted nine of his season total of 12 points in the past two games for Buffalo, which outshot the Red Wings 46-18 to win for the sixth time in its first nine contests.

Skinner also had two assists while Rasmus Dahlin added a goal with an assist for Buffalo during its highest-scoring game since a 9-2 win over the Ottawa Senators on Nov. 3, 2018. Jack Quinn also found the net, and Kyle Okposo notched two assists.

Detroit trailed 4-2 after two periods but made things interesting when Dylan Larkin beat Eric Comrie (15 saves) for a short-handed goal 4:19 into the third. However, the Sabres’ defense clamped down and Dahlin, Dylan Cozens, Thompson and Rasmus Asplund each followed with goals.

Olli Maatta and David Perron also scored for Detroit, which is 2-3-2 since winning its first two games of the season. The Red Wings swept all four games against the Sabres in 2021-22.

Buffalo outshot the Red Wings 14-6 in the first period and was first rewarded with 3:08 remaining in the frame. Skinner’s cross-slot pass found Thompson at the opposite circle to beat Alex Nedeljkovic (38 saves).

Detroit tied things 1:26 into the second. Maatta eventually got the puck at the top of the circle and beat Comrie on the far side.

The Sabres took the lead back nearly four minutes later. Thompson skated behind the Detroit net, then backhanded a pass to Quinn, who whipped the puck over Nedeljkovic’s shoulder.

Thompson registered his second assist when he fed Skinner, who was alone in the front of the Red Wings’ net and beat Nedeljkovic for his milestone goal with 5:34 left in the middle frame. The career night continued for Thompson, who showed off some nifty stick work to convert on the power play with 1:30 left in the second.

The Red Wings, however, struck with 57 seconds remaining before the second intermission. Positioned perfectly in front of the net, Perron buried his fifth goal of the campaign.