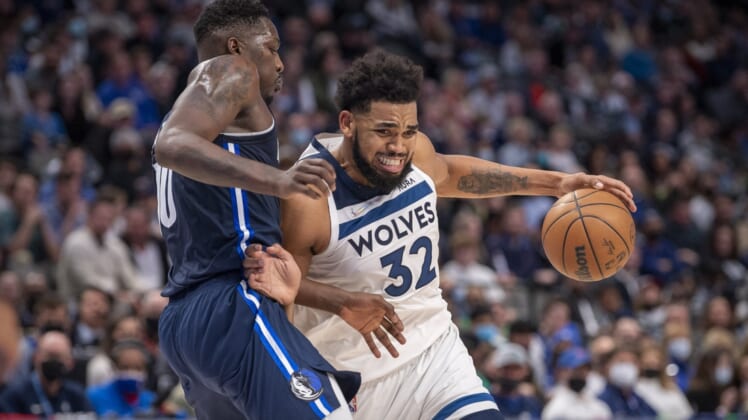 The Minnesota Timberwolves hope to welcome back two of their top players when the team tips off against the Oklahoma City Thunder on Wednesday night in Minneapolis.

Karl-Anthony Towns and D’Angelo Russell, both of whom were in the NBA’s COVID-19 protocol, have been cleared to return. Both players are listed as questionable and are working to build back their stamina through conditioning drills with the goal of being available to play.

“It’s up to how they feel,” Timberwolves head coach Chris Finch said. “As you exit these protocols, based on your symptoms and how long you’ve been in it and what your CT levels are, it determines when you can return to play with what type of ramp-up. Then you have to still feel good, be in shape and ready to go out and play an NBA-level game.”

The Timberwolves have been without Towns for the past six games and Russell for the past five. They have gone 2-4 over their past half-dozen games but are coming off a 122-104 road win against the Los Angeles Clippers on Monday night.

If available, Towns and Russell would provide a much-needed boost to the starting lineup. Towns leads the team with 24.5 points and 9.1 rebounds per game, and Russell ranks third in scoring with 18.7 points while averaging a team-high 6.7 assists.

Oklahoma City also has lost four of its last six games. The Thunder are coming off a 95-86 loss at home against the Dallas Mavericks on Sunday night, and with another loss they would match their worst record of the season at 11 games below .500.

As is the case with the Timberwolves, the Thunder have dealt with recent absences related to COVID-19. Tre Mann and Darius Bazley both returned from health and safety protocol on Tuesday, leaving Jeremiah Robinson-Earl as the only player still out for that reason.

Head coach Mark Daigneault also has been sidelined in COVID-19 protocol. He remained out for Tuesday’s practice, with Mike Wilks still in charge as the team’s acting head coach.

Players have supported Wilks during his time at the helm.

“I think everyone loves Mike Wilks,” Thunder guard Ty Jerome said. “He just has the perfect balance of when to talk to you, when to leave you alone. He’s always encouraging people.

“If you need something, you ask Mike Wilks.”

Shai Gilgeous-Alexander leads the Thunder with 22.7 points per game to go along with averages of 5.2 assists, 4.8 rebounds, 1.0 steals and 0.7 blocks. Teammate Luguentz Dort, who is dealing with a sore knee and is uncertain for Wednesday, is second with 16.3 points per game.

A bright spot for Oklahoma City has been newcomer Josh Giddey, who was named as the Western Conference Rookie of the Month for December on Tuesday. The 19-year-old from Australia averaged 11.8 points, 7.1 rebounds and 6.7 assists during the month.

This will be the opening game of a back-to-back set between the Thunder and Timberwolves. After a day off Thursday, they will meet Friday night in Oklahoma City.