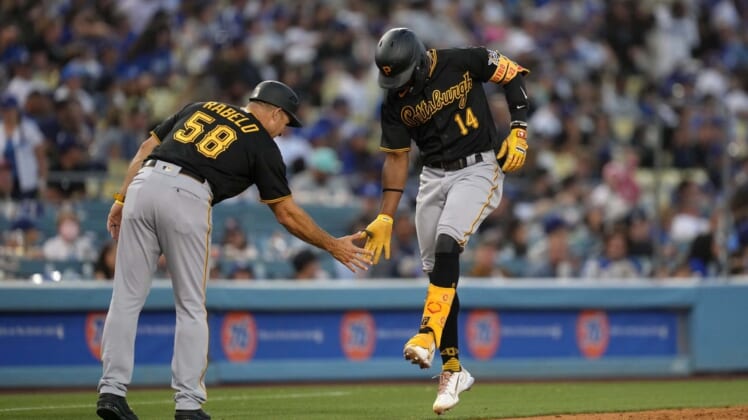 If analysis through recent common opponents matters, the Pittsburgh Pirates appear to have an advantage going into a three-game series that opens Friday against the visiting Arizona Diamondbacks.

Pittsburgh is coming off an improbable three-game sweep of the high-flying Los Angeles Dodgers on the road, while the Diamondbacks got swept at home in four games by the Dodgers last weekend.

The Pirates certainly gained some confidence in downing one of the top teams in the National League over three consecutive games.

“We showed something,” said Pittsburgh left-hander Jose Quintana, who was the starter in Thursday’s 8-4 victory at Los Angeles. “That’s really special. I know how all my teammates are feeling right now, and I think it’s a really good start for us.

“It means a lot for us. I think our confidence (is) really high, and I think now we can do really special things. We need to believe it.”

The Pirates’ offense was solid even though they didn’t blow away Los Angeles. They won the three games by a combined 19-12 score and head home looking to build on the experience.

“I think it just shows them they can play with anybody,” Pittsburgh manager Derek Shelton said.

The Pirates have won six of their past nine games and have won three consecutive for the first time this season.

The Diamondbacks, meanwhile, are concentrating more on what they have done since getting swept by Los Angeles.

They went to Atlanta and won the first two contests of a three-game series by a combined 14-9 score, before their momentum was halted Wednesday. Arizona’s offense sputtered with just three hits, and left-hander Madison Bumgarner stumbled in a 6-0 loss.

“There were a couple times where it crossed my mind to just turn around and throw it in the gap and save some time,” he said.

The Diamondbacks are opening a 10-game road trip against teams solidly under .500, with a chance to move over the .500 mark themselves at 25-27 heading into the weekend.

“We’re onward,” Lovullo said. “We’re heading east. We’ll be ready to play the Pittsburgh Pirates. We are not going to take that team lightly.”

Kelly started strong this year, going 3-1 with a 1.22 ERA through six starts, before leveling off over his last four appearances.

In his most recent outing, Kelly gave up three runs in five innings Saturday in one of those losses during the sweep by the Dodgers.

In his only start against Pittsburgh in 2019, Kelly picked up a win when he gave up two runs in seven innings.

Brubaker has allowed just two runs over 11 2/3 innings of his past two starts and both runs were unearned. But he was 0-1 in those games due in large part to a lack of run support. The Pirates have scored just two runs with him on the mound over his past four starts.

Brubaker has faced Arizona once, pitching five scoreless innings in a 4-2 win last season on Aug. 24.