Sun’s Jonquel Jones has score to settle with Sky 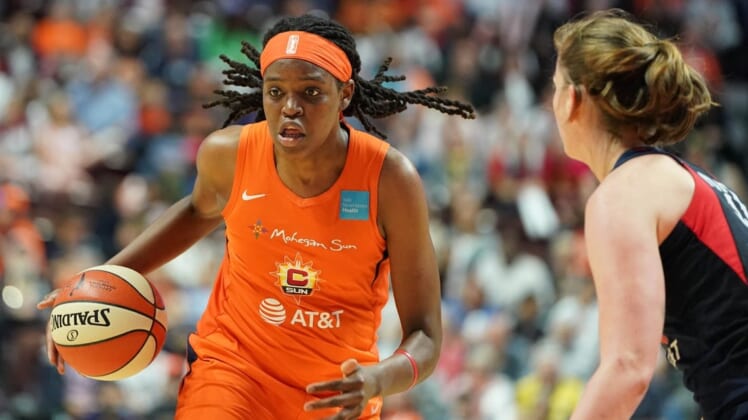 Jonquel Jones has revenge on her mind ahead of the Connecticut Sun’s home game against the Chicago Sky on Friday in Uncasville, Conn.

The Sky, after all, eliminated the top-seeded Sun in the semifinals last season. Chicago advanced to the WNBA Finals for the first time since 2014 and defeated the Phoenix Mercury to take home the title.

“I’m definitely looking forward to playing them,” Jones said, according the Hartford Courant. “Obviously we lost them in the playoffs, but I just think it’s a good matchup. And when you look at a team like that, it’s hard not to get excited about playing them.”

The Sun (10-3) are playing their best basketball of the season. They opened their four-game homestand in style on Wednesday, extending their win streak to four games with an 88-69 victory over the Indiana Fever.

Jonquel Jones, who is also the reigning WNBA Eastern Conference Player of the Week, averages a team-high 15.6 points per game for the Sun. Alyssa Thomas chips in club-best averages in rebounds (8.8), assists (5.6) and steals (1.7).

The Sky (7-4) saw their three-game winning streak come to a halt on Wednesday with an 84-82 setback at the Washington Mystics.

Chicago overcame a 17-point deficit to forge a tie at 82-82 with 27.9 seconds to play. The Mystics sank a pair of free throws on their next possession and Candace Parker’s bid to respond with a left-handed layup was off the mark, although coach James Wade felt his star was fouled on the play.

“Players have to be allowed to go from A to B,” Wade said. “You could see Elizabeth Williams pushed her off her path and then reach … and Candace shot it over the backboard. That was a foul. That was a foul.”

Kahleah Copper averages a team-best 13.6 points and Parker chips in a club-high 8.7 rebounds for the Sky.