Devin Booker’s Phoenix Suns teammates could help him out by sweeping the Milwaukee Bucks and giving him more time before the Tokyo Olympics.

The Suns’ star shooting guard reiterated his plan to play for Team USA during a media session on Wednesday, but a seven-game NBA Finals series would end on July 22; the U.S. begins play on July 25 in Tokyo.

“It’s the next thing smoking. I’ll be there,” Booker said, adding that the Olympics are “very important” and a “life goal of mine.”

Looking further ahead, the gold medal game is Aug. 6.

Booker’s Suns will try to build on their 1-0 series lead, having turned back the Bucks 118-105 on Tuesday night, when they meet again Milwaukee again in Phoenix on Thursday night. 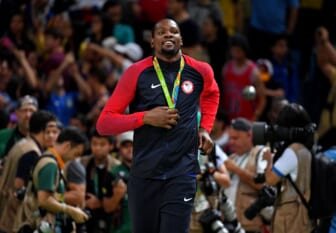 Among the other ties to these NBA Finals, Team USA managing director Jerry Colangelo was the Suns’ first general manager during Phoenix’s expansion season of 1968-69.

“I’ve reached out to coach Pop, I’ve reached out to Colangelo recently and told them (my plans),” Booker said. “I see all the guys have reported to Vegas. (The only other) place I’d rather be is the Finals. But I would love to be there with the guys, and I’ll be there soon. …

“I think it’s the most prestigious event that basketball can find. So to be a part of representing your country, I think, brings you to a whole other stratosphere. Just thinking about the guys who came before us and represented our country, I don’t think there’s anything better than winning a gold medal.”

The Bucks’ Khris Middleton and Jrue Holiday also are on the roster. 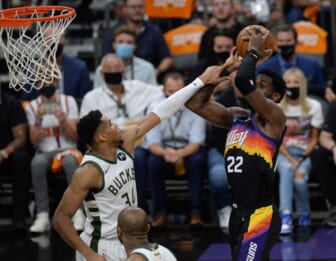