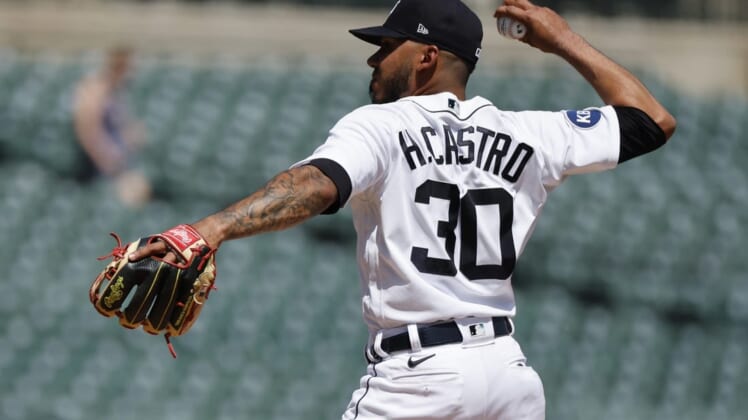 The Detroit Tigers’ offense has been nowhere to be found for much of the season.

Fresh off being shut out for the ninth time this year, the Tigers will look to get it in gear on Thursday in the opener of a four-game series against the visiting Texas Rangers.

Detroit, the lowest-scoring team in the majors, mustered just four hits in a 13-0 shellacking by the Chicago White Sox on Wednesday afternoon. The Tigers immediately had a players-only meeting after they were blanked for the second time during their four-game losing skid.

So, what was said?

“We just need to play better,” Detroit’s Eric Haase said. “Nobody likes going out there and getting your (expletive) handed to you every night. We feel like we’re a better team than that.”

The fans at Comerica Park haven’t been shy about letting the Tigers know just how they feel, too.

“The weather today was really hot and fans came to see us and they’re frustrated. We understand,” Tigers shortstop Javier Baez said. “Trust me, we’re frustrated in the dugout. If people want to let us know how they feel, great. I can’t control that. Obviously we’re losing a lot of games and it’s frustrating for (fans).”

Detroit will look to change the narrative on Thursday against Texas left-hander Martin Perez (4-2, 2.18 ERA), who boasted a majors-best 1.56 ERA before struggling mightily in his last outing. Perez surrendered season highs in runs (seven) and hits (12) in a no-decision against the White Sox on Saturday.

“Sometimes I’m not going to have my stuff and I’ve just got to go out there and compete,” Perez said. “They had my back (on Saturday), and that feels pretty awesome.”

Victor Reyes (5-for-9), Miguel Cabrera (4-for-11) and Robbie Grossman (5-for-19, two homers) have enjoyed a measure of success against Perez.

Detroit rookie right-hander Beau Brieske (1-5, 4.34 ERA) looks to ride the momentum of his first major league win when he makes his 10th career start overall and first appearance against Texas.

Brieske, 24, scattered seven hits over 5 2/3 scoreless innings in a 3-1 win over the Toronto Blue Jays on Saturday.

The Rangers erupted for 24 runs during a three-game winning streak before being limited to a total of five in back-to-back losses the past two days. Texas also found itself trailing by six runs before it had a chance to bat in a 9-2 loss to the Houston Astros on Wednesday.

Like the Tigers, the Rangers mustered just four hits on Wednesday.

“It (stinks) ,” Texas manager Chris Woodward said. “We just have to move on, get on a plane and go bring our A-game to Detroit. That’s all we can do.”

Texas’ Corey Seager belted a solo homer on Wednesday. He has six hits — including two homers — to go along with four RBIs and three runs in his past six games.