Struggling Blue Jackets try to get on track vs. Devils 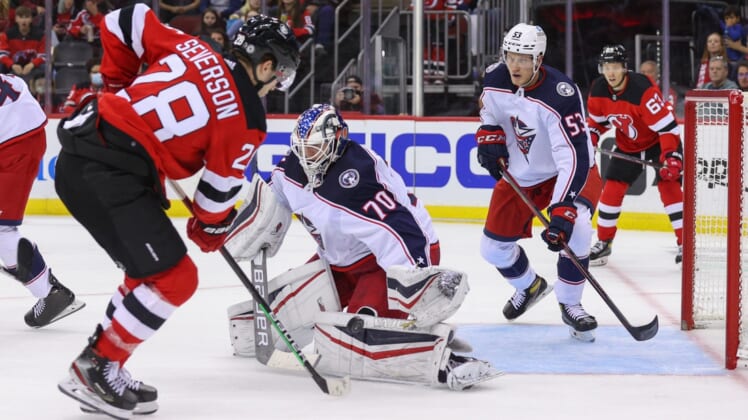 The Columbus Blue Jackets aim to put the brakes on their considerable slide Thursday when they visit the New Jersey Devils in Newark, N.J.

The Blue Jackets fell for the 10th time in their last 13 games (3-9-1) following a 7-2 shellacking against the Tampa Bay Lightning on Tuesday. Columbus has yielded seven goals in consecutive contests and as many as five tallies on six occasions over that 13-game stretch.

“We are in it right now and nobody feels sorry for us,” first-year head coach Brad Larsen said. “We’re not feeling sorry for ourselves. We’ll practice again and play again. After that we will play again.

“I go back to a lot of guys that are playing told me they can play at this level and want to play big minutes at this level. Now is the time to show it.”

The Blue Jackets saw several familiar faces return to the lineup on Tuesday, including Joonas Korpisalo. The goaltender admittedly was rusty in his first action since Dec. 16 and first start since Nov. 27.

“I honestly felt pretty good when the game started,” Korpisalo said. “… Obviously letting in seven goals, that’s embarrassing. Just the little details that probably I didn’t do too well today and that cost me a couple of goals right there.”

Korpisalo fared significantly better in Columbus’ previous encounter with New Jersey, a 36-save performance in a 4-3 shootout win on Oct. 31. He sports a 4-1-0 record with a slim 1.58 goals-against average and .942 save percentage in five career meetings with the Devils.

Jakub Voracek notched two of his club-best 22 assists in that contest on Halloween before scoring the lone goal of the shootout. The 32-year-old would be in line to play in his 1,000th NHL game on Thursday should he take the ice versus New Jersey.

Gustav Nyquist was held off the scoresheet in the initial meeting this season with Devils, but he has been heating up of late. Nyquist has collected a goal and an assist in each of his last two contests.

“We’re pretty happy with the performance,” said New Jersey assistant Alain Nasreddine, who is serving as the acting coach with Lindy Ruff in protocol since Dec. 31. “Did we make mistakes? Yeah. But did the guys put in the work? Absolutely. … It’s frustrating, but we’re all proud of the effort we put in, especially with the situation we’re in.”

Jesper Bratt has recorded five of his club-best 21 assists over his last four games overall. He also had an assist in the previous encounter against Columbus.