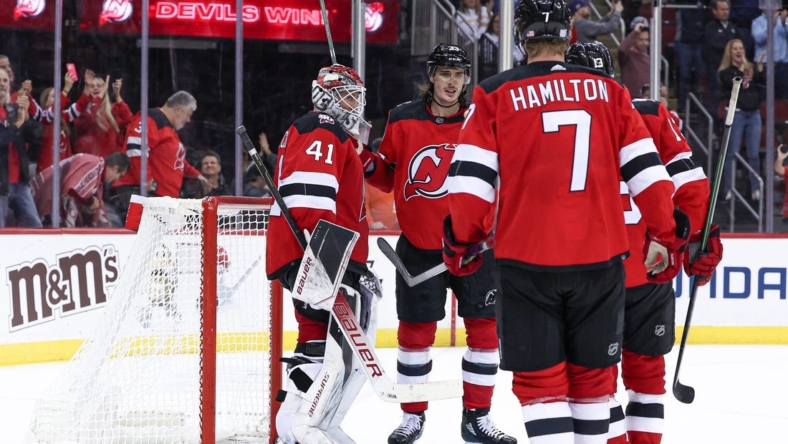 Nico Hischier scored the tiebreaking goal with 8:10 left in the third period Tuesday night for the New Jersey Devils, who extended their longest winning streak in more than a decade by edging the Calgary Flames 3-2 in Newark, N.J.

The Devils carried a 2-1 lead into the third and had the first three shots of the period before the Flames took 10 of the next 11. Calgary’s surge included Tyler Toffoli scoring a power-play goal at the 5:13 mark, just 20 seconds after Miles Wood was penalized for hooking.

New Jersey goalie Vitek Vanecek covered up a shot by Nikita Zadorov about a half-minute before the Devils mounted an end-to-end rush. Devils winger Tomas Tatar, whose interception of a pass by Nick DeSimone deep in New Jersey’s zone led to the hosts’ first goal in the second period, got to a loose puck after a battle between teammate Jesper Bratt and Zadorov.

Tatar passed to Dougie Hamilton, who skated into the neutral zone before dishing to a wide-open Hischier streaking up the left side of the ice. With Calgary defenseman MacKenzie Weegar trying to make up ground, Hischier bore in on Flames goalie Jacob Markstrom and fired a shot under his glove.

Ryan Graves and Hamilton scored in the second for the Devils, and Hischier and Hamilton each had a goal and an assist. Tatar logged two assists, and Vanecek made 33 saves.

Nazem Kadri opened the scoring in the first for the Flames. Rasmus Andersson had two assists, and Markstrom recorded 18 saves.

Kadri scored on the power play at 11:58 of the first. The Devils tied it when Tatar skated through the neutral zone before issuing a drop pass to Hischier, who dished to Graves. A shot by Graves went beyond Markstrom’s glove 5:14 into the second.

The Devils took the lead late in the second during a five-on-three power play. Hamilton exchanged the puck with Fabian Zetterlund before scoring when his shot sailed past Markstrom, who was almost completely screened by Hischier, at 16:37.

Toffoli tied the score after taking a pass from Andersson, skating into the slot and sending a shot past Vanecek as the Flames’ Adam Ruzicka skated to the right of the goalie.