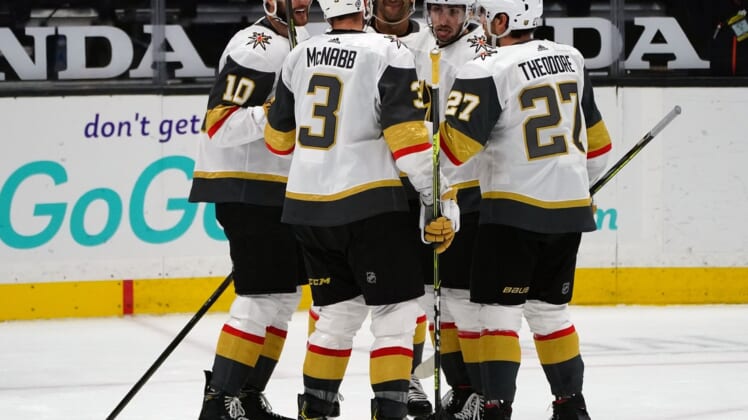 William Karlsson and Chandler Stephenson both scored in the first five minutes of the second period and the visiting Las Vegas Golden Knights extended their winning streak to five games with a 4-0 victory over the Anaheim Ducks on Friday.

Goaltender Robin Lehner made 16 saves in his first shutout of the season as Vegas won for the fifth time in its past six road games and improved to 3-0-0 on a four-game trip to Los Angeles and Anaheim.

Nicolas Roy and Brayden McNabb also had goals for Vegas, while Mark Stone had two assists to give him a team-leading 34.

The second-place Golden Knights inched within two points of the West Division-leading Colorado Avalanche, who had their next three games postponed because of COVID-19 concerns.

Playing in front of fans for the first time in more than a year, the Ducks hardly gave the crowd of 2,000 anything to cheer about as Anaheim’s modest two-game winning streak came to an end.

Ducks goaltender John Gibson had 47 saves in his return after Anthony Stolarz played the previous two games. Gibson saved a penalty shot by Stephenson with 5:27 to play.

After a scoreless first period in which Vegas had a 15-6 advantage on shots, the Golden Knights needed just nine seconds of the second period to get on the scoreboard. Karlsson picked up a loose puck in front of the Anaheim crease, after Reilly Smith lost possession in traffic, and scored his 11th of the season into a wide-open goal.

Just over four minutes later, Stephenson made it 2-0 with his 10th of the season. Stone fed a charging Stephenson just inside the blue line, and the center flipped a shot inside the left post and past Gibson.

Roy completed a three-goal second period for the Golden Knights when he scored with 22 seconds remaining before the second intermission. Roy stole the puck from the Ducks’ Max Comtois, moved in on goal and beat Gibson over his right shoulder. It was Roy’s fourth goal of the season.

McNabb’s second of the campaign came at the eight-minute mark of the third period off assists from Stephenson and Stone.

The teams will complete a two-game set Sunday at Anaheim. Vegas can move into a tie for first place in the West with a victory.