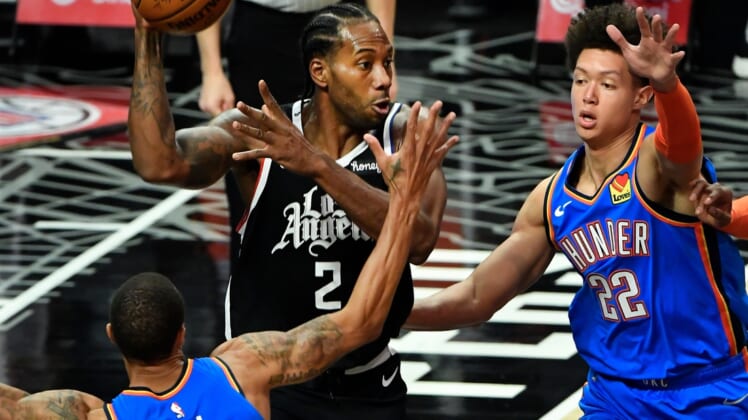 The infamous 51-point beatdown by the Dallas Mavericks on a Sunday afternoon last month is one of their most embarrassing performances in franchise history. The Clippers trailed by an NBA-record 50 at the break.

“We just have to come ready,” Clippers forward Paul George said of Sunday’s matinee matchup at home against the Oklahoma City Thunder.

“That’s all it is, just come ready (and) just be prepared and get into our preparation early. That’s all it is. Simple as that. … Everybody’s just got to start that engine early.”

The Clippers will attempt to extend their season-high six-game winning streak in their second meeting with the Thunder in less than 48 hours.

Los Angeles motored to a 120-106 win over Oklahoma City on Friday behind 31 points and eight rebounds from Kawhi Leonard and 29 points, seven rebounds and five assists from George, who spent two seasons with the Thunder before being traded to the Clippers prior to the 2019-20 season. Serge Ibaka contributed 17 points on 7-of-8 shooting and 11 rebounds against his former club.

Nicolas Batum, whose wife gave birth to a baby girl hours before Friday’s game, added 14 points by hitting 5 of 6 shots, including all four of his 3-pointers.

“Just seeing him having a beautiful daughter and then come back and want to play the same night just shows his dedication,” Clippers coach Tyronn Lue said. “It means a lot to the team. Just happy for him.”

The Clippers also have enjoyed the pleasure of their recent play. They have averaged 123.8 points and limited opponents to 105.2 points per game during their streak.

In Friday’s game, the Clippers raced out to a big lead early and dominated for almost the entire contest. After leading by as much as 27, they allowed the Thunder to creep within 10 points late in the third quarter before resuming control in the fourth.

“They were the aggressor, but I thought we really helped them out,” Thunder coach Mark Daigneault told the Daily Oklahoman. “We gave them a lot of pretty clean plays. Once we got the game under control, I thought we played pretty well. I was really happy with the way we stood up tonight. It was kind of a landslide there early in the game.”

Ex-Clipper Shai Gilgeous-Alexander had 30 points and eight assists for the Thunder, who have lost four of their last five contests.

Luguentz Dort scored 15 of his 19 points in the second half. George Hill finished with 12 points, Mike Muscala had 11 and Hamidou Diallo chipped in 10 for Oklahoma City.