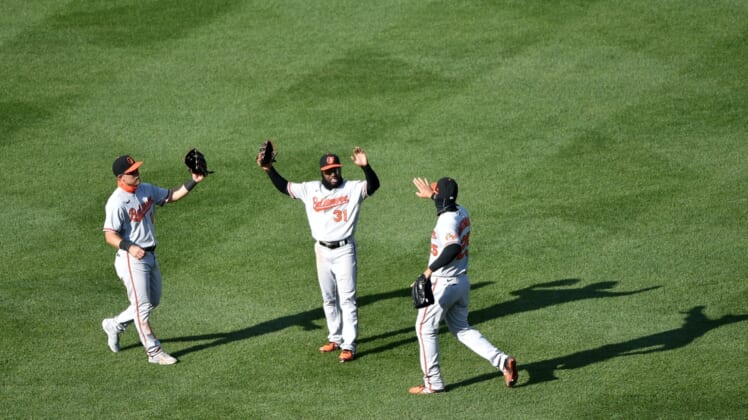 The Baltimore Orioles put on an impressive display at Fenway Park and now they will try to stay unbeaten when they visit a ballpark at which they rarely experience success.

Off to a 3-0 start, the Orioles attempt to halt a 10-game losing streak at Yankee Stadium when they visit the New York Yankees for the opener of a three-game series on Monday night.

The Orioles are coming off a dominant three-game sweep in Boston where they outscored the Red Sox 18-5. They are 3-0 for the first time since winning their first four games of the 2017 season.

The Orioles capped their series in Boston by scoring seven times in the third inning of an 11-3 victory Sunday afternoon.

“A lot of really nice two-strike hitting, a lot of good situational hitting,” Orioles manager Brandon Hyde said. “We left some runs out there early, too. It was nice to see guys up and down the order contribute, starting off with the top three guys I think had 10 hits, so you’re going to win more games than not when that happens.”

New York’s last loss to the Orioles at home was March 31, 2019, when the Orioles took two of three in Hyde’s first series as manager and John Means recorded his first win. Its 10-game home winning streak over Baltimore is its longest since also winning 10 straight from July 30, 2008, to July 22, 2009.

The Yankees are looking to extend the streak after a frustrating weekend at the plate in their season-opening series with the Toronto Blue Jays. New York ended the series with a 3-1 loss on Sunday and during the first three games, the Yankees were 4-for-23 with runners in scoring position and their only two homers were from Gary Sanchez.

“We were just a little bit cold overall throughout (the series) but these guys will get it rolling. So, I’m not too worried about it.”

Jordan Montgomery, Monday’s starter for the Yankees, will begin his second season since recovering from missing most of 2018 and 2019 due to Tommy John surgery.

Montgomery was 2-3 with a 5.11 ERA in 10 starts last season and Monday will be his first home start in front of fans since 40,758 fans watched him pitch five innings against the Minnesota Twins on April 26, 2018.

“Really last year getting back out on the mound consistently was awesome,” Montgomery said. “Having fans this year will give you a little bit of adrenaline, excitement, nerves.”

Montgomery pitched well during spring training, going 3-0 with 0.90 ERA in three starts. He pitched in a simulated game Wednesday and is pitching in a game for the first time since March 17.

The left-hander is 2-1 with a 2.92 ERA in seven career starts against Baltimore. He took a no-decision in his last outing against the Orioles when he fanned nine and allowed three hits in 5 2/3 scoreless innings on Sept. 12.

Jorge Lopez will begin his first full season for the Orioles. Lopez was 2-2 with a 6.34 ERA in nine games (six starts) after being claimed off waivers from the Kansas City Royals.

Lopez is 1-1 with a 6.23 ERA in three career starts against the Yankees. In his last outing against them, he allowed three unearned runs and three hits in five innings during a 6-3 win at Baltimore on Sept. 4 of last year.