Christmas is right around the corner. Most of the nation is covered in a blanket of snow. Yep. College football bowl games are here, and we can’t wait for them to begin.

There are five games on the slate this upcoming Saturday. And while the big hitters won’t play for a couple more weeks, there are plenty of reasons to tune into these games as we move into the winter holiday season.

We’ll be taking a look at these reasons as we examine the top storylines for this weekend’s college football bowl games.

1. How much will home-field advantage help Lobos?

The Gildan New Mexico Bowl is literally an eighth home game for the New Mexico Lobos. The bowl game is being contested at University Station in Alberquerque, where the Lobos went 6-1 this year, their only loss coming to the formidable Mountain West program, Boise State.

The stadium will be packed with Lobos fans, eager to se their team win its first bowl game since 2007.

During the regular season, New Mexico averaged nearly 45 points per game at home. In the six games they won at Universtity Stadium, their average margin of victory was approximately two touchdowns.

With this in mind, it’s not surprising whatsoever that New Mexico is being favored to win by a touchdown.

Barring a tremendous defensive effort by Texas-San Antonio on Saturday, the Lobos will likely run away with this one — literally. This team features the nation’s top-ranked rushing attack, averaging more than 360 yards on the ground per game. The Roadrunners haven’t exactly been great at stopping the run, either, allowing 190-plus rushing yards per game.

We’re expecting a blowout win for the Lobos, but there is something that could stop that.

Because Texas-San Antonio doeasn’t feature a dominant defense, it is not fair to assume the Roadrunners will be able to shut down the meatgrinder rushing attack of the Lobos.

With this in mind, the best chance the Roadrunners have of winning this game is to dominate the time of possession battle and score touchdowns, rather than field goals, when they get into scoring range.

The two main weapons this offense has at its disposal are running backs Jarveon Williams and Jalen Rhodes. This dynamic duo has combined to rush the ball 333 times for 1,531 yards and 17 touchdowns. Working in their favor in this game is that New Mexico features the nation’s 61st-ranked run defense, allowing 166 yards per contest.

By pounding the rock, converting third downs and moving the chains in a methodical manner, the Roadrunners have a fighting chance to win this game. 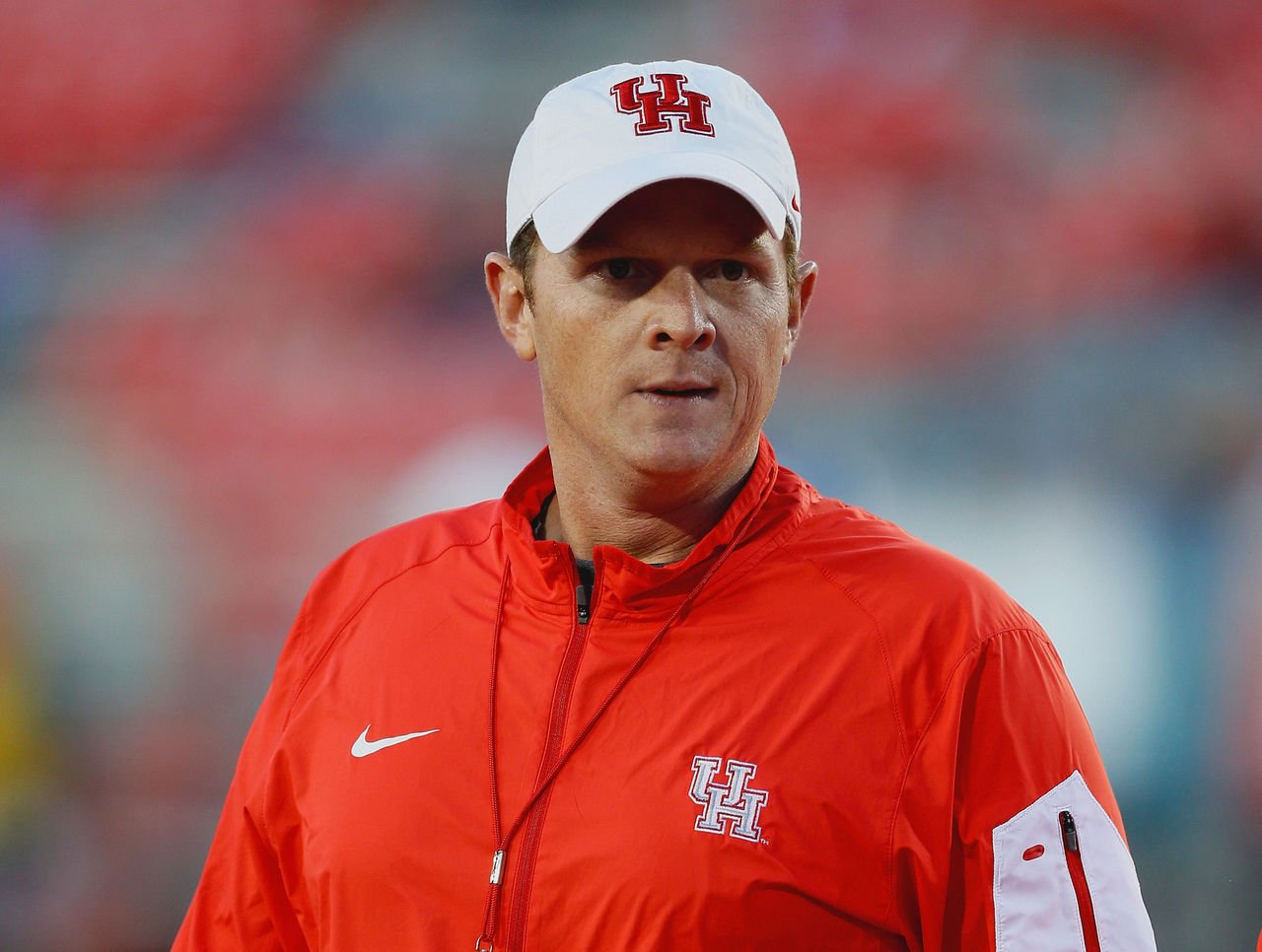 It’s a new day in Houston, with former head coach Tom Herman now preparing to take the helm at Texas. The university made a smart decision to promote from within, bumping former offensive coordinator Major Applewhite up to the position of head coach last week (more on that here).

Defensive coordinator Todd Orlando is also staying on, so the Cougars did not lose any continuity on either side of the ball.

The Major Applewhite era is getting kicked off in style as Houston will take on the San Diego State Aztecs at the Las Vegas Bowl Presented by Geico at Sam Boyd Stadium. These two teams lost a combined six games all year long, so fans should expect some excellent football on display in this game.

Look for senior quarterback Greg Ward Jr. to lay it all on the line as he ends his collegiate career. He’s been one of the nation’s top quarterbacks the past couple of years and put on a show in a losing cause in Houston’s last game against Memphis.

Houston’s defense will have its hands full keeping the Aztecs off the scoreboard, and we’ll explore why in just a moment.

Applewhite couldn’t have asked for a better chance to prove his worth as a leader right off the bat. This bowl game will feature some fireworks.

4. Donnel Pumphrey on the verge of NCAA history

The Las Vegas Bowl features one of the best players in college football. San Diego State’s Donnel Pumphrey is just 108 rushing yards away from breaking the NCAA’s all-time record for career rushing yards.

In addition to his 6,281 career yards on the ground, Pumphrey has scored 61 times on the ground in his four years at San Diego State. He’s also piled up 99 receptions for 1,015 yards and five touchdowns through the air.

A complete back who has the ability to hit a crease and leave defenders in the dust, he’s one of the most exciting players in the nation. Though he isn’t much to look at as a physical specimen (5-foot-9 and 180 pounds dripping wet), Pumphrey is lightning in a bottle.

If you haven’t yet seen him hit the turbo button, you absolutely must tune into the game on Saturday on ABC, starting at 3:30 p.m. ET.

5. Toledo’s offense is a rocket ship of fun 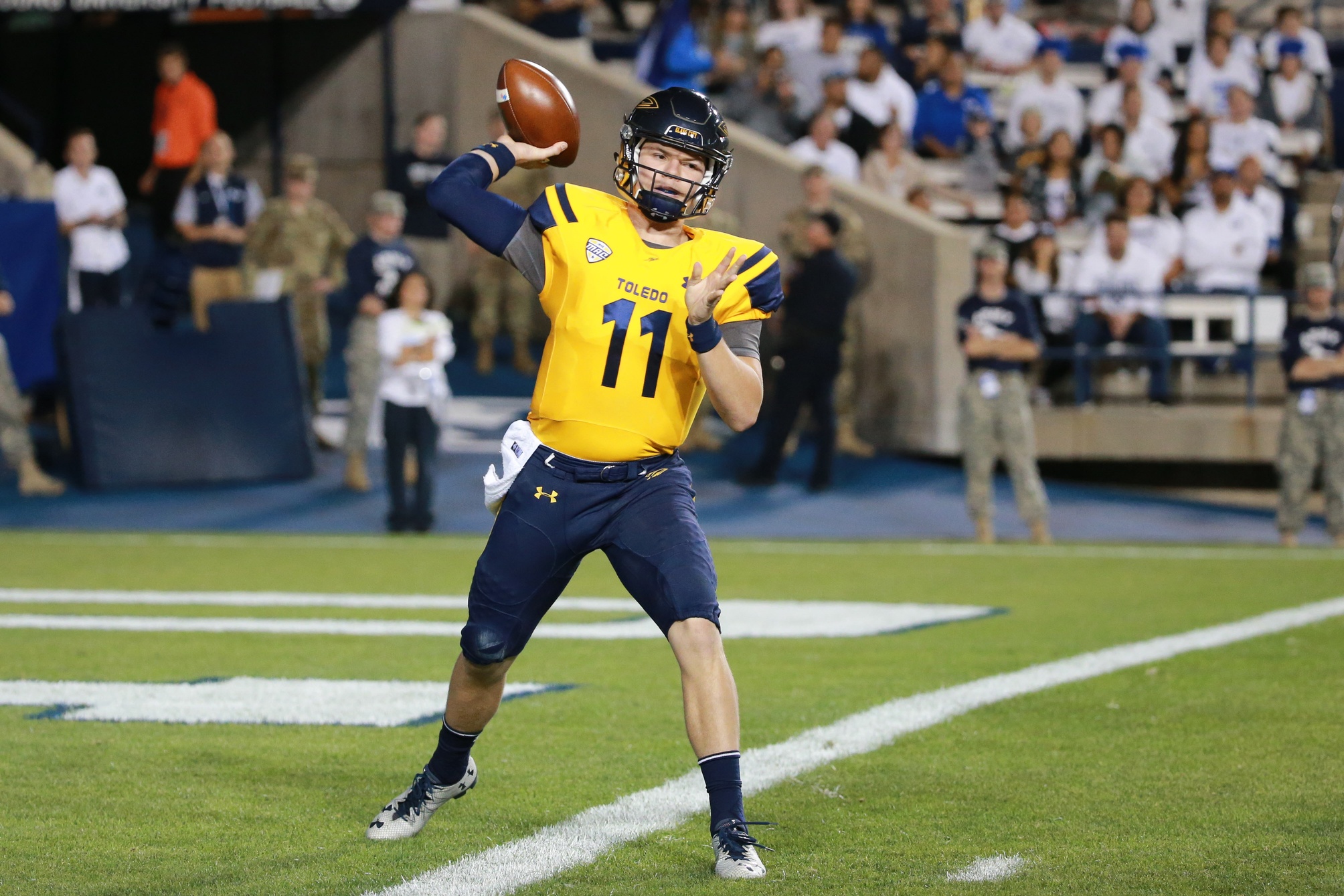 The Raycom Media Camellia Bowl features one of the more explosive offenses in the nation. Toledo, led by quarterback Logan Woodside, puts up an average of nearly 39 points and 530 yards of offense per game.

Woodside is coming off an up and down performance in a losing cause against undefeated Western Michigan in the MAC Championship Game. Trying to keep pace with the Broncos, he threw a couple of bad interceptions, including a pick-six on the game’s opening play for either team. He also threw three touchdowns in that game, finishing with 43 on the season to lead all passers in the FBS.

Featuring an explosive receiving corps that had five receivers catch touchdowns of 61 yards or longer, Woodside is an incredibly dangerous distributor and threw at least three touchdowns in every single game this year.

Kareem Hunt rounds out the offense as a dynamic running back who averaged 5.6 yards per carry on his way to a 1,355-yard, eight-touchdown season on the ground.

It’s going to be fascinating to see if Appalachian State can shut down the powerful Rockets, which leads us to our next point nicely.

6. Can the Mountaineers play keep-away from Logan Woodside?

If Appalachian State has any hope of beating Toledo, then the Mountaineers are going to need to play keep-away from the Rockets’ high-powered offense.

This means we’ll see a heavy dose of sophomore running back Jalin Moore, who rushed for 1,367 yards and 10 touchdowns this year. Both Moore and backup Marcus Cox averaged well over six yards per carry and combined for 18 rushing scores.

Quarterback Taylor Lamb isn’t going to light up the Toledo defense and needs to be careful not to turn the ball over — a problem he’s had this year. Instead, the game plan for the Mountaineers has to revolve around the running game and the team’s stout defense.

The talent level between these two teams is extremely close. They are a contrast in styles, and it’s going to be interesting to see which team comes out ahead.

7. Couple of sack masters on display when UCF and Arkansas State clash 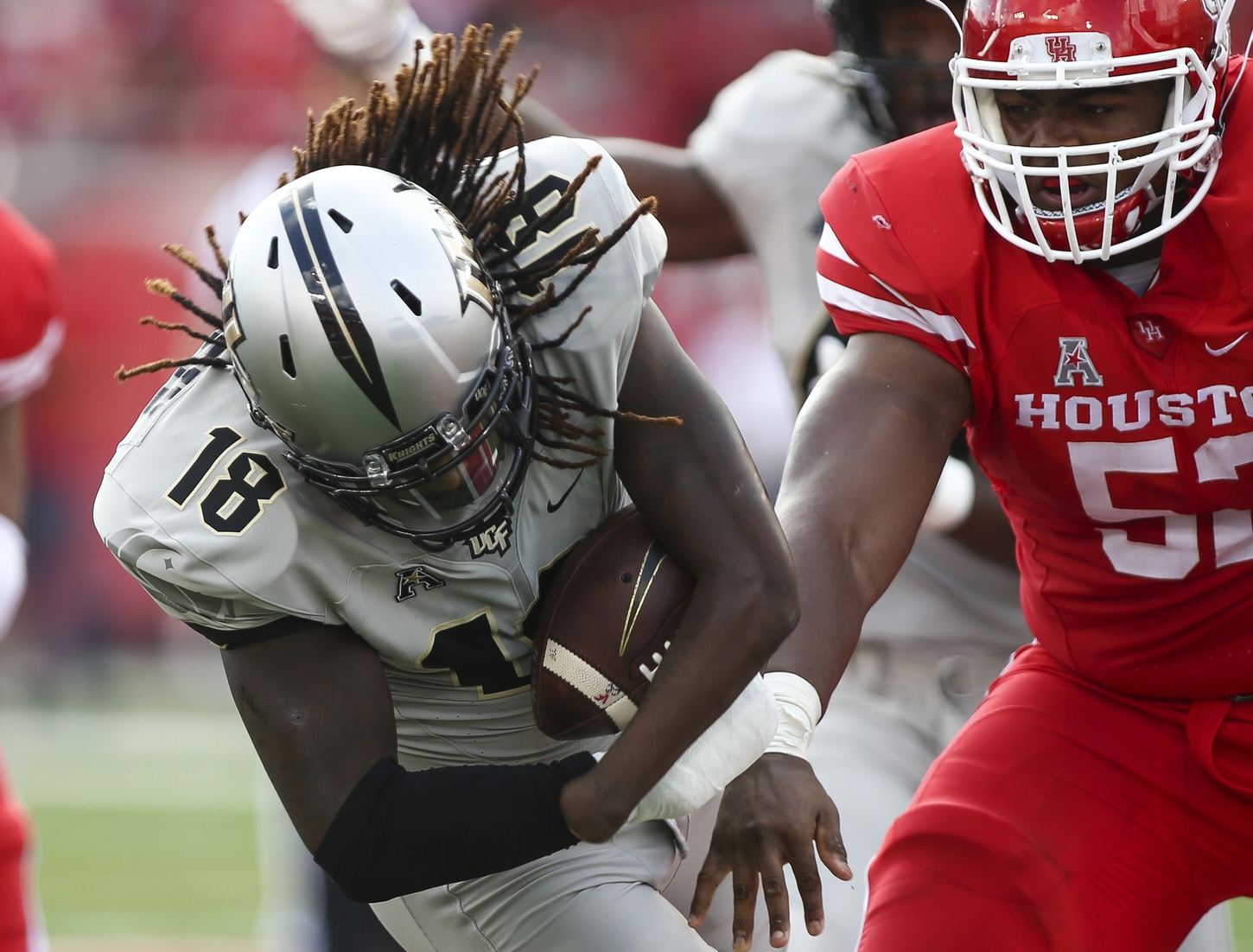 Fans of dominant defense should be thrilled at the chance to see UCF’s Shaquem Griffin and Arkansas State’s Ja’Von Rolland-Jones on the same field.

Griffin is an undersized linebacker who is a first-year starter after begining his career with the Knights as a defensive back. This kid can straight up fly, and UCF defensive coordinator Erik Chinander uses his speedy linebacker often to rush the passer.

As a result, Griffin racked up 19 tackles for a loss and 11 sacks to lead the conference. Not surprisingly, he was named the American Athletic Conference’s Defensive Player of the Year.

On the other side of the field, Rolland-Jones earned the same honor as the Defensive Player of the Year in the Sun Belt Conference. As an undersized defensive end (6-foot-2 and 231 pounds), he uses his quickness to get off the ball and attack opposing quarterbacks. On the season, he tallied 18.5 tackles for a loss and 11.5 sacks.

While Arkansas State doesn’t feature much in the way of team defense, Rolland-Jones is a player to watch as he dominates off the edge.

After losing their first four games, the Red Wolves rattled off seven wins in their final eight games to finish the season with a respectable 7-5 record and a bowl bid. As the season wore on, the team’s offense got more cohesive. Arkansas State finished the year averaging 35.5 points per game in its final six games.

While the Red Wolves gained momentum, the Knights never did get into any kind of rhythm throughout the season. They won two games in a row twice and lost two in a row twice, finishing the regular season with losses to Tulsa and South Florida.

How much will momentum play a factor in this game? Probably not much. After having a couple of weeks to regroup, it’s going to be like a new season, if only for one game.

And quite honestly, we’re picking the Knights to take the cake in this one. 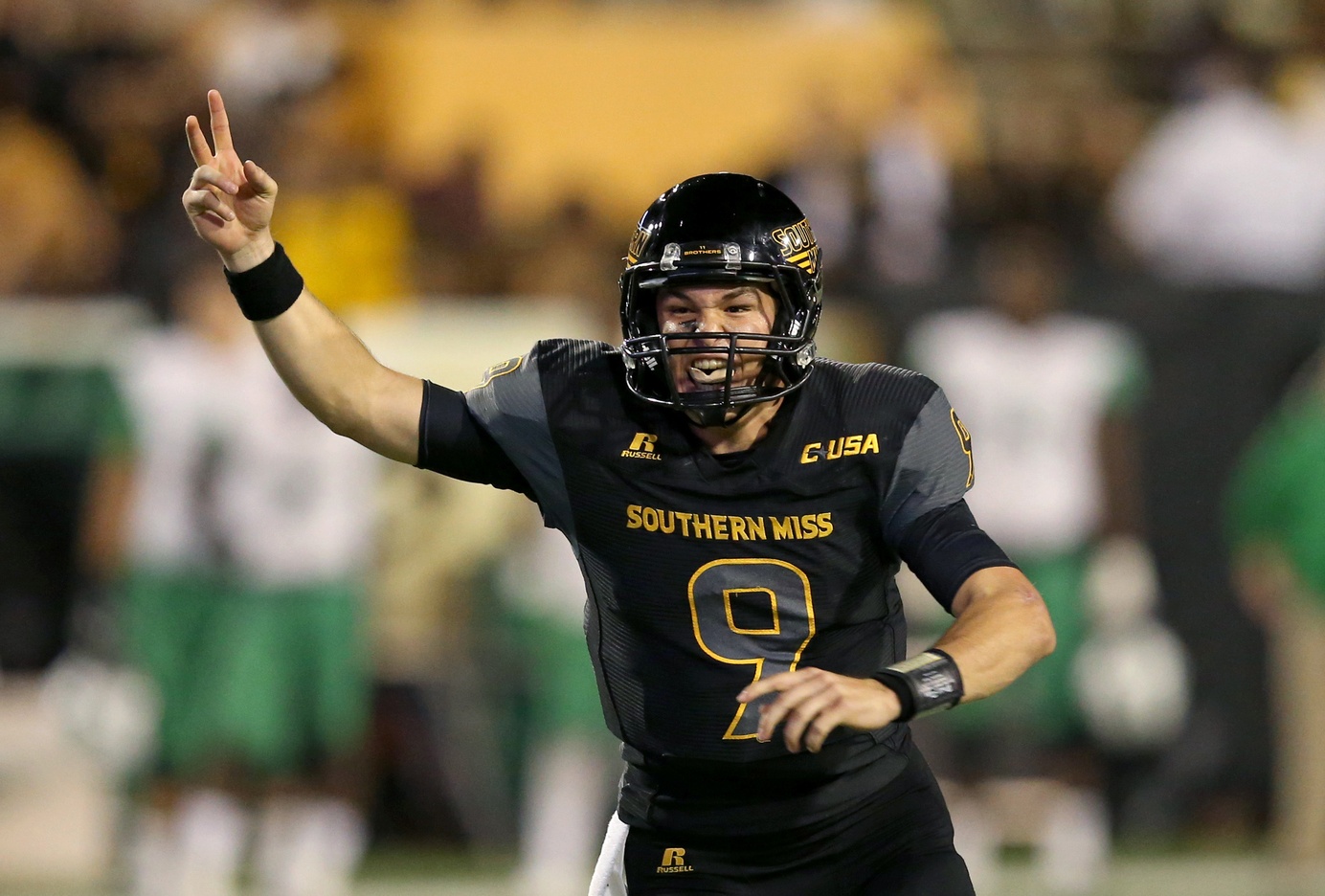 It’s going to be a rowdy environment at the Mercedes-Benz Superdome when Southern Mississippi and Louisiana Lafayette get together for the R+L Carriers New Orleans Bowl Saturday night.

Both schools should be represented heartily in the stands, and they both feature offenses that should light up the scoreboard.

In particular, we’re looking forward to watching senior quarterback Nick Mullens play his final game as a member of the Golden Eagles. In his last game, against Louisisana Tech, Mullens threw for 342 yards with three touchdowns and zero interceptions.

Neither team is bringing a defense into the game that scares anyone, either.

What we’re angling at here, folks, is that you should definitely take the “over” if you plan on doing any gaming in relationship to this contest.

10. Watch out for Ito Smith

Speaking of offensive firepower, Mullens has quite the complementary piece behind him in running back Ito Smith.

In addition to his rushing prowess, Smith was the team’s third-leading receiver this year. He caught 42 passes for 453 yards and a touchdown, giving him 1,774 combined yards on the season.

A true home run threat, he had touchdown runs of 86, 70 and 69 yards in 2016. A dangerous weapon both on the ground and through the air, we won’t be surprised if the junior back ends up as the MVP of this bowl game.