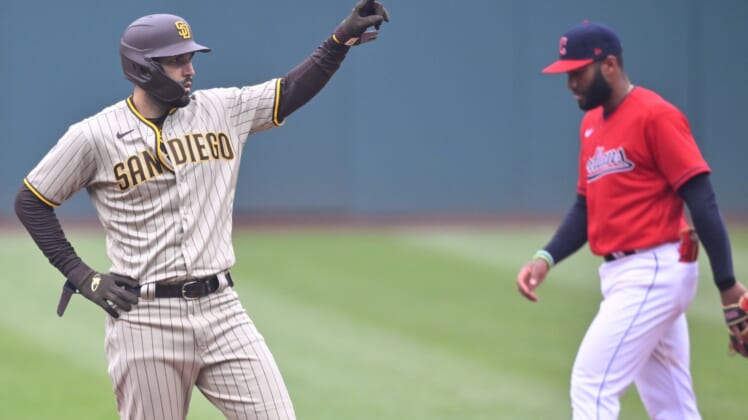 Rookie Steven Kwan’s run-scoring single in the bottom of the 10th inning gave the Cleveland Guardians a 6-5 come-from-behind victory over the visiting San Diego Padres in Game 2 of a doubleheader on Wednesday.

The Padres won the first game 5-4.

Kwan, the American League Rookie of the Month for April, knocked in Owen Miller from second base with a groundball to right field off Padres reliever Dinelson Lamet (0-1).

Nick Sandlin (2-1) pitched a scoreless top of the 10th in relief.

The Guardians erupted for three runs in the bottom of the eighth to tie the score at 5-5. Miller scored on a single by Andres Gimenez and Austin Hedges followed with a run-scoring single off reliever Tim Hill. After San Diego made a pitching change, pinch-hitter Josh Naylor greeted reliever Robert Saurez with a line-drive single that scored Gimenez.

The Padres won six of their eight games on their just-concluded East Coast trip.

The Padres wasted little time getting to Guardians starter Cal Quantrill, who experienced some early control problems in the top of the first. Eric Hosmer’s double in the gap in right-center scored Trent Grisham and Manny Machado, who both walked.

Hosmer scored on Ha-Seong Kim’s single for a 3-0 advantage.

Quantrill, who came to Cleveland in the nine-player Mike Clevinger trade in 2020, worked six innings and allowed three earned runs, three hits and five walks. The right-hander struck out a season-high seven batters.

Singles by Gimenez, Straw and Amed Rosario loaded the bases in the third. Jose Ramirez walked to drive in his major league leading 29th run on the season, leaving the score at 3-1.

The Guardians edged closer with a run in the seventh inning. Ernie Clement’s drive off the left-field wall drove in Hedges from first base after a close play at the plate, leaving the score 3-2.

San Diego scored two key insurance runs in the eighth. Jurickson Profar’s double drove in Machado for a 4-2 advantage. Profar scored on a bases-loaded walk by C.J. Abrams. It was the first earned runs allowed by reliever Trevor Stephan this season.