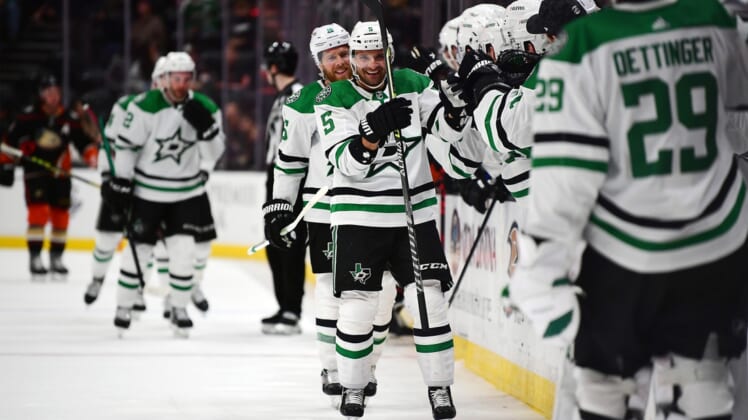 In a dogfight for a Western Conference playoff spot, the Dallas Stars continue a four-game road trip that so far has been successful with a Saturday night game at San Jose.

“Every game from here on out is huge,” Benn said after scoring his 17th goal of the season on a breakaway off a long stretch pass from Miro Heiskanen. “We’ve got to find a way to win games, and we did that tonight.”

The Stars have won four straight road games, all by one goal. The streak started with a 3-2 win at Washington and continued with a 4-3 shootout victory at Metropolitan Division-leading Carolina.

Thursday’s overtime victory over the Ducks enabled Dallas to leapfrog the idle Vegas Golden Knights into the second wild-card spot.

“There’s going to be a lot of tight games,” Benn said. “We’ve been in tight games all year. Our group’s been through a lot over the last couple years, added some great players to our roster. We’re comfortable in tight games. Good teams find a way to win, and that’s what we are.”

Saturday’s game against the Sharks (29-30-8, 66 points) is the front end of a back-to-back that ends with a Sunday night contest at Seattle. The Stars then play six of their next seven games at home, where they are 21-9-1.

San Jose, 13 points behind Dallas with just 15 games remaining, has dropped three of its last four games. The Sharks come in after losing both ends of a road back-to-back at Arizona (5-2) and Colorado (4-2).

The contest with the Avalanche was tied 2-2 in the third period until Mikko Rantanen scored the game-winner with a power-play goal with 7:43 to go. Andre Burakovsky sealed it for Colorado with 4:44 remaining.

“I thought we played hard for being in a back-to-back situation,” San Jose coach Bob Boughner said. “I thought there were a lot of good things with our game. That’s one of, if not the best, teams in the league. There are things we needed to do better (such as) faceoffs and pouncing on some of our chances.”

One player who continues to shine for the Sharks is right wing Timo Meier, who scored his team-best 31st goal of the season in the first period. Meier has scored six goals over his last six games.

“They’re a good team over there,” Meier said of the Avalanche. “They’ve got a lot of firepower. We’ve got to improve and bring more to beat a team like that.”

This is the second of three meetings between Dallas and San Jose. The Sharks, behind 34 saves by James Reimer and goals by Tomas Hertl and Erik Karlsson, won the first one, 2-1, on Dec. 11 in San Jose.