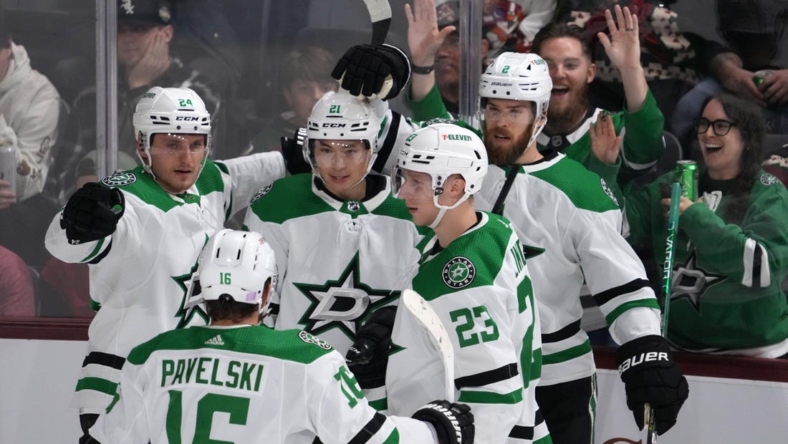 Jamie Benn had a goal and two assists as the Dallas Stars rolled to a 7-2 victory over the Arizona Coyotes on Thursday in Tempe, Ariz.

It was the highest-scoring game of the year for the Central Division-leading Stars, who have won their past two games.

It was a well-rounded team effort for the Stars, as 13 different players collected at least one point. Gurianov opened the scoring after 87 seconds, and Dallas was up 4-0 after one period.

Juuso Valimaki and Lawson Crouse scored for Arizona, after the Coyotes were already down 6-0 in the third period. Matias Maccelli assisted on both goals.

Arizona goaltender Connor Ingram was pulled less than 12 minutes into the game after he allowed three goals on 10 shots. Ingram was hampered by some poor defending from his teammates, including a bad pass from defenseman Dysin Mayo that led to Johnston’s goal.

Karol Vejmelka stopped 22 of 26 shots in relief. Vejmelka made a poor clearing pass of his own early in the third period, sending the puck directly to Benn for an easy goal.

After collecting three assists without scoring a goal in his first nine games, Benn has five points (one goal, four assists) in his past two games.

Robertson has also been hot, with eight points (five goals, three assists) over his past four outings. Robertson leads the Stars this season in both goals (seven) and points (15).

The Stars won the special teams battle, going 1-for-4 with the extra attacker and killing off Arizona’s lone power-play chance.

Arizona went 1-2-1 in its first homestand in its new venue, 5,000-seat Mullett Arena at Arizona State University. The Coyotes don’t have another home game until Dec. 9 as the team now embarks on a 14-game road trip.