Stars aim to strengthen hold on wild-card spot vs. Devils 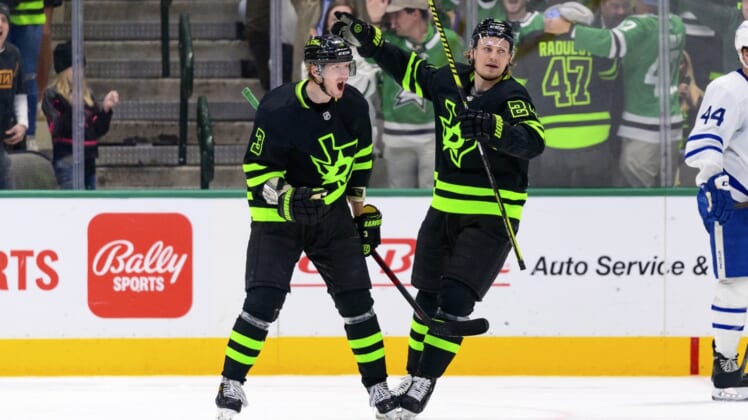 Earning one point Thursday night was enough for the Dallas Stars to increase their razor-thin advantage in the race for the final wild-card spot in the Western Conference.

On Saturday afternoon, the Stars will look to maintain their lead by hosting the New Jersey Devils — a team engaged in an entirely different and less enthralling race.

The Stars and Devils were off Friday after absorbing home defeats the previous night. Dallas dropped a 4-3 overtime decision to the Toronto Maple Leafs, while New Jersey fell 7-4 to the Montreal Canadiens.

The Stars were outshot 41-18 and trailed 1-0, 2-1 and 3-2 before forcing overtime against the Maple Leafs. The red-hot Auston Matthews scored 2:10 into the extra session for his second goal of the game and NHL-leading 56th of the season.

“The vibe in the locker room, the mentality we have (is) we’re never out of it,” goalie Scott Wedgewood said. “Regardless of shot counts or things like that, I’ve just always found that we find a way to get something generated. Whether it takes 50 minutes or not, they’re still looking and they’re not going to give up.”

Still, the Stars (40-26-4, 84 points) extended their lead to two points in the race for the West’s last playoff spot. They have two games in hand on the Vegas Golden Knights, with the teams scheduled to play in Dallas on April 26.

“You’re down there, you get a point, so you take it,” Stars coach Rick Bowness said. “We were certainly going for two in overtime, we just didn’t get it (on Thursday).”

Saturday’s game begins a five-game Western Conference road trip for the Devils (24-41-6, 54 points), who will be looking to play spoiler.

New Jersey resides in last place in the Metropolitan Division and is assured of missing the playoffs for the ninth time in 10 seasons since reaching the Stanley Cup Finals in the spring of 2012. The Devils have lost five straight (0-4-1) and 10 of 12 (2-9-1).

Despite his team’s troubles, Devils captain Nico Hischier envisions the team’s upcoming road trip as an opportunity for the club to feel better about its lost season.

“It’s a chance, for sure,” Hischier said. “I’m sure everybody tries to battle hard the rest of the year. That’s what we’re looking for. Focusing on what we can do and just battle hard.

“We want to control what we can and be a competitive team the rest of the year.”

The Devils are just five points ahead of the Arizona Coyotes in the race for the worst record in the NHL and the best odds at winning the draft lottery.

“Everybody wants to win,” Devils coach Lindy Ruff said Friday. “You don’t play a game not to win. Put the work in, win your battles. Be the team that the other team goes, ‘What a game they gave us.'”