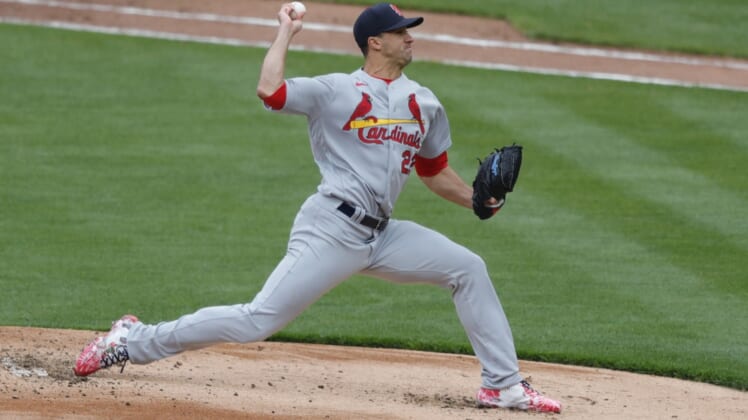 Dylan Carlson’s three-run homer highlighted a six-run first inning, and Paul Goldschmidt had four hits as the visiting St. Louis Cardinals recorded an 11-6 season-opening win over the Cincinnati Reds on a chilly Thursday.

Cardinals starter Jack Flaherty allowed six runs and homers to Nick Castellanos (three hits) and Eugenio Suarez over 4 1/3 innings. Giovanny Gallegos, who struck out two in a perfect eighth inning outing, was credited with the victory.

St. Louis didn’t waste any time getting on the board to open the season. Goldschmidt doubled off the right-field wall, Arenado singled in his first St. Louis at-bat and Paul DeJong delivered an opposite-field RBI single.

Things only got worse for Castillo as the opening inning went on. Moved from third base to shortstop, Suarez failed to glove a Yadier Molina grounder with the bases loaded that resulted in a two-run error. Carlson immediately followed with his shot off the right-field foul pole to give the Cardinals the early 6-0 cushion.

Cincinnati got a run back in the bottom of the first after Jesse Winker (two hits) doubled and later scored on a wild pitch. However, Arenado gave the Cardinals’ their six-run edge back with an RBI single in the second.

Castellanos’ two-run homer to deep left field made it 7-3 after three innings. St. Louis, though, got those runs right back — and more — in the fourth when Goldschmidt delivered a run-scoring single and Tommy Edman scored on a wild pitch. After Castillo exited without recording a strikeout, O’Neill went deep off Cam Bedrosian to give the Cardinals an 11-3 lead.

Suarez knocked a solo homer in the bottom of the fourth. Joey Votto’s single and Mike Moustakas’ sacrifice fly in the fifth got the Reds within five runs.

Cincinnati center-fielder Nick Senzel left after he injured his shoulder making a diving catch in the fourth.