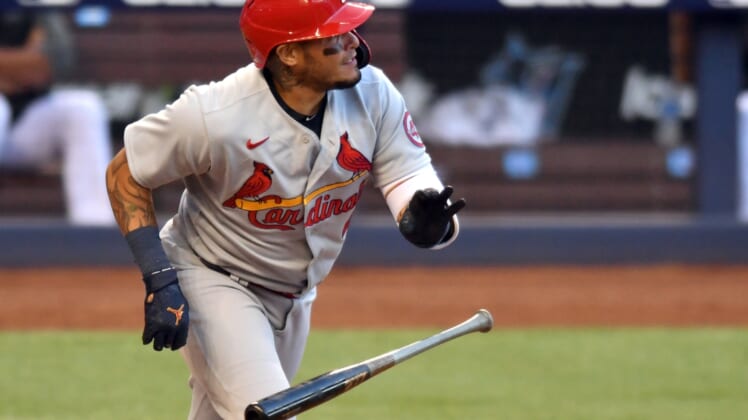 Yadier Molina connected on a two-run double, and Tommy Edman homered, leading the St. Louis Cardinals to a 4-1 win over the host Miami Marlins on Monday night.

St. Louis snapped a two-game losing streak as four Cardinals pitchers limited the Marlins to just five hits. Miami’s only extra-base hit was a one-out double by Brian Anderson in the fourth.

Daniel Ponce de Leon (1-0), who walked 13 batters in 17 spring-training innings, was much better on Monday. He allowed just three hits, one walk and one run in five innings.

The Cardinals got scoreless relief pitching from Jordan Hicks (one inning), Giovanny Gallegos (two innings) and Alex Reyes, who earned his first save of the season by allowing no damage in the ninth.

All three of those runs scored in the first inning — on just one hit.

Rogers, who needed 38 pitches to exit the inning, missed on his first nine throws. He walked the bases loaded before St. Louis scored on a Jorge Alfaro passed ball. Molina then stroked a two-run double off the wall in center.

The Marlins brought in reliever John Curtiss for the fifth, and the Cardinals scored almost immediately as leadoff batter Edman led off the inning by pulling a homer to right.

Miami scored in the fifth thanks in part to a bunt play.

Jon Berti drew a leadoff walk. Magneuris Sierra then bunted too hard toward third baseman Nolan Arenado, who looked to get the lead runner at second. But shortstop Paul DeJong wasn’t covering — he had gone to back up third. By the time Arenado reacted, Sierra was safe. Then, after a groundout, Berti scored on Starling Marte’s sacrifice fly.

Cardinals pitchers, however, shut down the Marlins the rest of the way, retiring 11 straight batters from the fifth through the eighth innings.

Reyes allowed a two-out single to Alfaro in the bottom of the ninth. But Reyes got Berti on a force play at second to end the game.