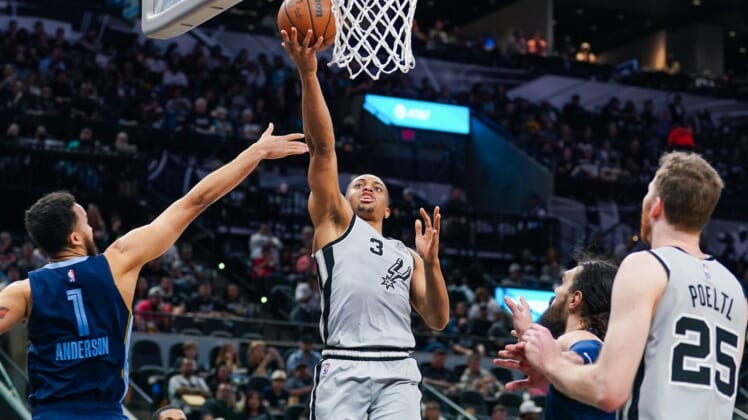 The San Antonio Spurs and Portland Trail Blazers will still be carrying postseason aspirations when they square off Friday in the first of a two-games-in-three-days series in San Antonio — but time is running out.

The teams also play Sunday evening, and both games will have an impact as the NBA’s regular season grinds to an end.

The Spurs (31-45) have the better chance to reach the Western Conference play-in tournament as they have been flip-flopping with the Los Angeles Lakers for the 10th and 11th spots in the West over the past week. San Antonio fell to 11th — and one position short of the play-in tourney — when it fell at home to surging Memphis 112-111 on Wednesday.

The Spurs trailed by 18 points late in the third quarter against Memphis but rallied to tie the game early in the fourth and had a chance to win in the final seconds. After a miss by the Grizzlies and a timeout, San Antonio ran a final play for Keldon Johnson, who missed a contested layup with 2.7 seconds remaining, allowing Memphis to escape with the victory.

“They executed the last play very well, but it didn’t go in,” Spurs coach Gregg Popovich said after Wednesday’s setback. “Like I told them, if that’s the worst thing that ever happens in your life then you live a pretty easy life, so get over it. Come and play Friday. Screw that.

“But I’m proud of them. It was good stuff. A great growing experience for them against a hell of a team.”

Dejounte Murray tied a career-high with 33 points and added 13 rebounds for San Antonio while Johnson scored 23 and Devin Vassell had 19 in the loss, which snapped the Spurs’ four-game winning streak.

San Antonio center Jakob Poeltl said his team refused to give up.

“I think that’s part of us, part of this team, part of the individual characters we have,” Poeltl said. “Got a lot of fight in us. We got a lot of young guys that have energy that just don’t want to give up on games.”

The Trail Blazers (27-49) head to San Antonio after a 117-1107 loss at home to New Orleans. Portland, which dropped all five games of a homestand and 15 of its past 17, is in desperation mode to make a run for the postseason, sitting in 13th place and four games in back of San Antonio with six games to play in the regular season.

Drew Eubanks, who was traded from the Spurs to Portland at the deadline, led the Trail Blazers with 21 points on Wednesday. Ben McLemore had 16, Reggie Perry scored 15, and Brandon Williams added 10 points and 10 assists. Portland kept the game within reach by outscoring New Orleans by 24 points from beyond the arc.

“We made some progress, for sure,” Portland coach Chauncey Billups said afterward. “I thought the guys played well. We were able to sustain. There were a couple of tough blows a few times, but we were able to kind of hang in there. It was a well-played game for our guys.”

The Spurs dominated the Blazers in the teams’ most recent meeting, winning 133-96 on March 23 in Portland.