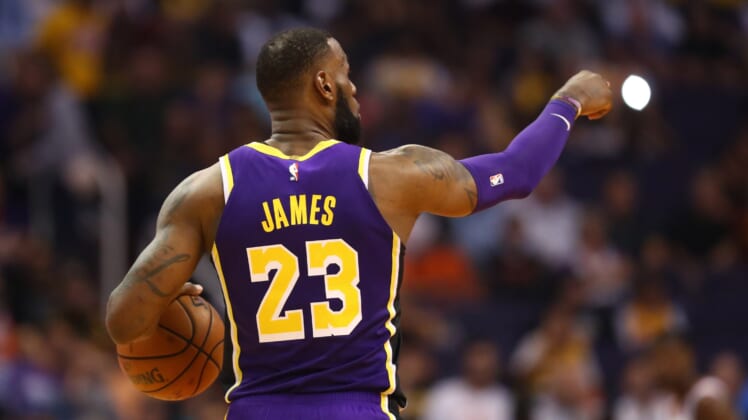 He did it. Already considered one of the greatest of all-time, Los Angeles Lakers forward LeBron James is now alone in fourth place on the NBA scoring list — surpassing the legendary Michael Jordan

It came on this And-1 against the Denver Nuggets Wednesday evening at the Staples Center.

? @KingJames moves up to 4th on the NBA's all-time scoring list with the AND-1! ?#LakeShow @ESPNNBA pic.twitter.com/gaJW6Gt1fL

The 15-time NBA All-Star, three-time NBA Championship and four-time MVP now sits with some of the immortals who have played this grand game of basketball. James now stands above His Airness.

Needless to say, those around the sports world paid their tributes to King James after this crowning achievement.

Congratulations to LeBron. Best player of his era, maybe the best ever. A bad Lakers team doesn’t change that. pic.twitter.com/np2hjMOxxk

Who could have ever guessed what this would become. pic.twitter.com/aqN6S1foA1

From an Ohio kid in high school – to passing his idol Michael Jordan for 4th on the NBA’s all-time scoring list.? @KingJames pic.twitter.com/crUTFNxWj0

Congratulations to @KingJames for passing Michael Jordan on the NBA’s All-Time Scoring list ?

? @KingJames reflects on the milestone! ? pic.twitter.com/Te1cxOwZp6