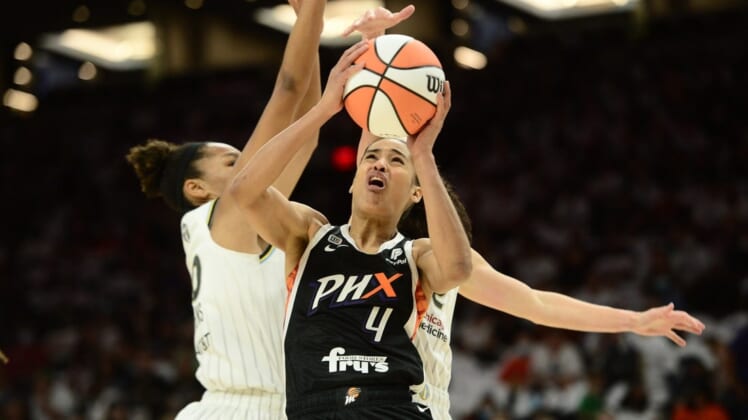 Liz Cambage’s unfulfilling time with the Los Angeles Sparks is over and the team begins to move on when they visit the Phoenix Mercury on Thursday night.

Cambage clashed with teammates in Saturday’s 84-66 road loss to the Las Vegas Aces and told them afterward she was done playing with them. The four-time All-Star and the Sparks mutually agreed to a departure on Tuesday.

“We want what’s best for Liz and have agreed to part ways amicably,” Los Angeles managing partner Eric Holoman said in a statement. “The Sparks remain excited about our core group and are focused on our run towards a 2022 playoff berth.”

Cambage averaged 13.0 points and 6.4 rebounds in 25 games (24 starts) in her lone season with Los Angeles. The Sparks (12-15) are in sixth place and will attempt to ignite a playoff push with nine regular-season games left.

Star center Nneka Ogwumike figures to be asked to carry even more of the load. The former WNBA MVP averaged 27.5 points over a two-game stretch before having just 10 points against Las Vegas.

Ogwumike is averaging 18.7 points and 6.8 rebounds.

Phoenix (12-16) is also battling for a playoff spot. The Mercury are in the ninth position despite being just a half-game behind Los Angeles. Only the top eight teams make the postseason field.

It was a pivotal victory for the Mercury, who are 2-1 heading into the finale of a four-game homestand.

“If we can be a little more consistent, I think we’ll have a good chance.”

The Sparks are 2-1 against the Mercury this season. Los Angeles lost 81-74 in Phoenix on June 5.