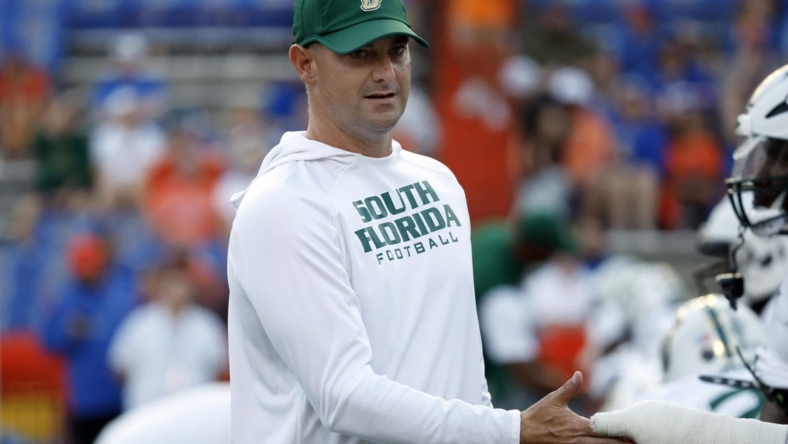 South Florida, in the midst of a 1-8 season, fired head football coach Jeff Scott on Sunday.

“When Jeff came to Tampa in December of 2019, we had high expectations for where he could take our football program,” athletic director Michael Kelly said in a statement. “While he did so many things right, including rebuilding our culture, pushing forward our Indoor Performance Facility, and engaging our community, the on-the-field results fell well below our standards. He is a tremendous person and class individual and we wish him, Sara, Savannah and Hunter all the best in the future.”

The Bulls lost their seventh straight game Saturday when host Temple pulled away in the fourth quarter for a 54-28 win. South Florida is 0-5 against American Athletic Conference opponents and won its only game against Howard, an FCS opponent.

Scott was hired ahead of the 2020 season after serving as Clemson’s wide receivers coach, run game coordinator and co-offensive coordinator between 2008 and 2019. He originally signed a five-year deal and also inked a two-year extension following the 2021 season.

But South Florida went just 4-26 under Scott, including a paltry 1-19 in conference.

“I would like to thank our players, coaches and staff members for all their hard work during my time as the head coach at USF,” Scott said in a statement. “I especially want to thank USF President Rhea Law and Vice President/Director of Athletics Michael Kelly for giving me the incredible opportunity to lead the football program the last three years. I will miss this team and will do anything in my power to help them in the future. I am disappointed that our hard work didn’t translate to more success on the field, but I am confident that we have set a new foundation. I know the future of USF football is bright and my family and I will always remember our time at USF as a very special chapter in our lives.”