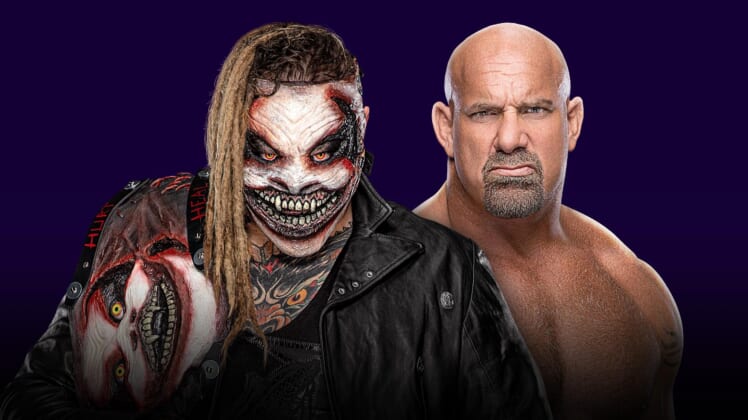 WWE Super ShowDown is slowly coming together for the SmackDown brand.  The Saudi Arabian showcase will be streaming live at 1PM EST on Thursday, Feb. 27, 2020 from the King Fahd International Stadium in Riyadh, Saudi Arabia.

Tune in to WWE Friday Night SmackDown live from Vancouver, British Columbia on FOX this Friday at 8pm EST/7pm CST to find out what is next for stars of the SmackDown brand as they head into Super ShowDown in two weeks.

WWE Hall Of Famer Bill Goldberg returned live via satellite and made it clear he wants to get his hands on The Fiend. The former WWE, Universal, and WCW champion wants his rematch for the Universal Championship that he never received after losing to Brock Lesnar a few years ago.

Current Universal Champion Bray Wyatt interrupted Goldberg and had a special edition of the Firefly Funhouse for “William”.  Is The Fiend next for Goldberg? With only two weeks to go till Super ShowDown, we will find out soon.

Who gets the next shot at SmackDown Women’s Champion, Bayley?

I’m confused. Wasn’t Naomi next in line for SmackDown Women’s Champion, Bayley? Just two weeks ago, Naomi got the best of Bayley and was on the path to get her shot at the belt next, right? The seeds were planted for Naomi vs Bayley, but instead we are getting former SmackDown Women’s champion Carmella against the current champion.

WWE Intercontinental Champion Braun Strowman will continue his feud against former champion Shinsuke Nakamura after being beat down by Nakamura and the rest of Sammy Zayn’s crew last week. The Revival seem to now be members of Team Zayn as they assisted Team Sammy in their beatdown of the WWE Intercontinental Champion.  The IC title rematch between Nakamura and Strowman will happen at Super ShowDown and hopefully end this feud for good.

Otis really grows on you

Heavy Machinery was a tag team that I had trouble getting behind. Slowly, they got more exposure on television and I was hooked on Otis and Tucker. There is always a star in every group and Otis is the star of Heavy Machinery. WWE made a smart move by adding in Mandy Rose to get over Heavy Machinery. Rose has made the loveable Otis even more endearing to the WWE Universe. This storyline has been a nice surprise each week on SmackDown Live.

Why is the Shorty G and Sheamus feud still going on? Does anyone want to see more of Roman Reigns vs King Corbin? It looks like we aren’t done with either of them yet. These feuds are being extended and we will once again see King Corbin vs Roman Reigns and Sheamus vs Shorty G at either Super ShowDown or on this edition of SmackDown Live.

Don’t forget to check out SmackDown Live this week as the superstars of the blue brand continue to develop the WWE Super ShowDown and WrestleMania 36 match cards.

In case you need to plan way in advance, WWE officially announced that WrestleMania 37 will be held at SoFi Stadium in Inglewood, California on March 28, 2021. This will be another huge venue for WWE to hold the showcase of the immortals and an event you surely will not want to miss.