Slumping Warriors look to get back on track at Grizzlies 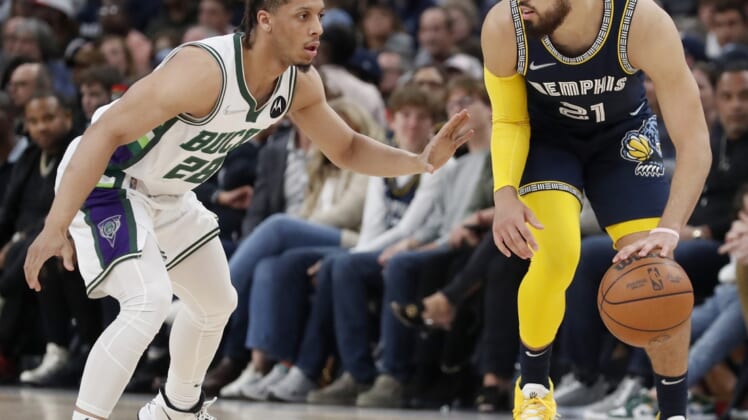 The surging Memphis Grizzlies continue their push to lock up the Western Conference’s No. 2 seed in the NBA playoffs, hosting the Golden State Warriors on Monday.

Memphis (52-23) won its fourth straight and eighth in the last nine games with a 127-102 rout of reigning champion Milwaukee on Saturday, despite playing without Most Valuable Player contender Ja Morant.

De’Anthony Melton picked up the scoring slack with 24 points off the bench. Desmond Bane scored 20 points and Dillon Brooks added 19.

“It doesn’t matter if you’re a starter, bench, mixed lineup, whatever,” Memphis coach Taylor Jenkins said in his postgame press conference. “Yes, roles have had to adjust a little bit, but they know when they’re out there how we play basketball.”

Scoring balance behind Morant has buoyed the Grizzlies throughout the season. Four players who have appeared in at least 58 games average in double-figures scoring: Bane at 18.2 points per game, Jaren Jackson Jr. (16.4), Melton (10.4) and Brandon Clarke (10.3).

Brooks, limited to 27 games due to injury, is averaging 17.9 points per game for the season. He comes into Monday’s matchup with Golden State scoring 60 combined points in the last three outings for his best scoring stretch since posting at least 19 points over a six-game stretch in December.

That December streak ended for Brooks, coincidentally, with 13 points in a 113-104 loss at Golden State. That meeting was the Grizzlies’ only defeat in three matchups with the Warriors this season. Brooks was unavailable for those other two games.

Golden State (48-27) is slumping coming into Monday’s contest, the second leg of a back-to-back. The Warriors dropped their second straight and fifth in the last six games, 123-115 on Sunday in Washington.

They shot a dismal 8-of-33 from 3-point range in their fifth game since losing Stephen Curry to a foot injury. Jordan Poole made only 1-of-10 shots from deep, ending his streak of consecutive games making at least four 3-pointers at five.

Poole still managed to score a game-high 26 points, Klay Thompson chipped in 25 and Andrew Wiggins added 23, but Otto Porter Jr. (14 points) was the only other Warrior to reach double-figures.

Draymond Green, who finished with seven points on 2-of-6 shooting and three turnovers on Sunday, gave a blunt assessment of his play in his postgame press conference.

“I’m playing terrible,” he said. “I’ve never really been on a team that gets worse when I’m on the floor, and that’s kind of the way we are right now.”

Golden State’s lone win in its last six games, a 118-104 defeat of host Miami on March 23, came with Green on the sidelines. He has yet to score in double-figures since returning to the lineup from a lengthy absence due to a back injury.