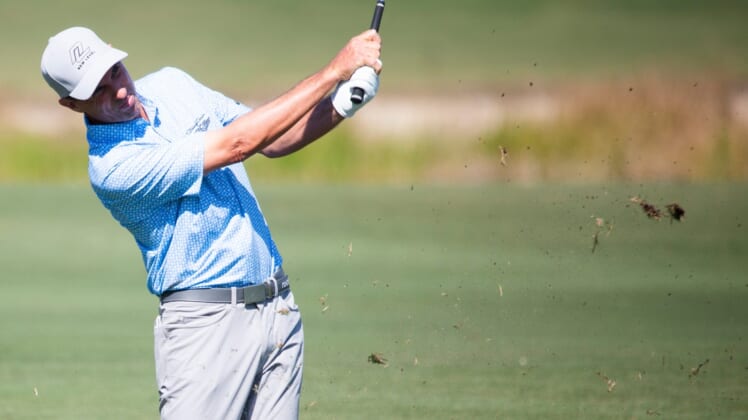 A three-way battle for the Insperity Invitational championship turned into a solo coronation on the final nine holes as New Zealand’s Steven Alker pulled away to claim the crown at The Woodlands (Texas) Country Club on Sunday.

Alker shot a 6-under-par 66 in the final round to emerge with a four-shot win over Steve Stricker and Brandt Jobe. The trio entered the day tied for the lead at 12 under, and Alker wound up at 18-under 198.

Alker was one stroke ahead of Jobe and Stricker at the turn before making his move. Starting at No. 11, Alker went birdie-birdie-birdie-par-eagle-birdie in a six-hole span.

Alker said of his mindset heading to the back nine, “It was pretty tight. Knew Steve wasn’t going away and Brandt was playing well, so it only took a few birdies and you’re behind. Yeah, just pleased to keep the roll going. I played the back nine great this week, so just pleased.”

The gap at the top was five strokes heading to the 18th hole, where Alker recorded a bogey while Stricker and Jobe each carded a par.

Alker, 50, emerged with his third PGA Tour Champions victory, adding to triumphs at the 2021 TimberTech Championship and the 2022 Rapiscan Systems Classic.

He had brief stints on European Tour in the late 1990s and the PGA Tour in the early 2002s but never won an event. Alker made the cut in major tournaments just twice.

“I’m just most proud of shooting low scores,” Alker said. “My short game and putting’s come around. Yeah, it’s just all coming together. I’m just having so much fun, it’s been great.”

Germany’s Alex Cejka finished in fourth place at 11 under after a 66 on Sunday. Ken Duke (final-round 70) and South Africa’s Retief Goosen (68) tied for fifth at 10 under.

Stricker, 55, was playing his first tournament since October.

“It was a good week,” he said. “Kind of learned where I’m at, which was good. I felt like my game got a little bit better every day, which was good. … I guess yesterday was probably the best day that I played, but still did a lot of good things today again. Started to feel a little more comfortable. I’m tired, though.”