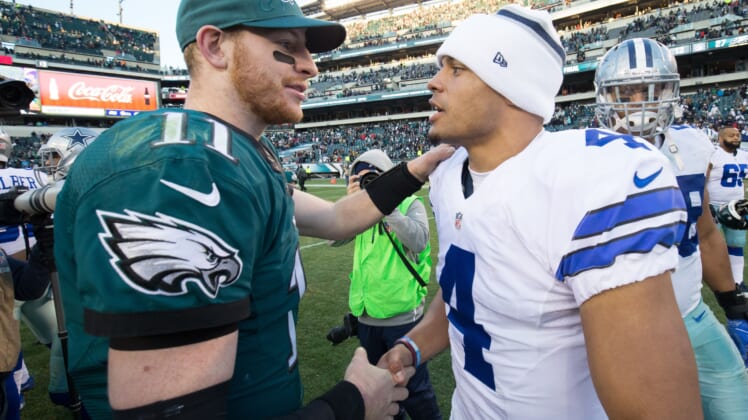 We’re putting six teams on upset alert heading into Sunday’s NFL Week 7 action, and chances are at least a few of them will succumb.

Starting with an undermanned Green Bay Packers team hosting the Oakland Raiders and finishing with an NFC North special Sunday Night Football matchup pitting the Philadelphia Eagles against the Dallas Cowboys, these are the teams we’re eyeing to lose to underdogs in NFL Week 7.

The Packers come into Sunday’s matchup against Oakland extremely shorthanded on offense. Davante Adams has been ruled out with his toe injury. Fellow wideouts Geronimo Allison and Marquez Valdes-Scantling could also miss the game depending on how they are come game day.

Oakland comes into the game with an extremely effective power rushing attack led by rookie Josh Jacobs, and Green Bay’s defense has been atrocious defending the run. Stacking the box won’t likely help, either.

If the Packers do try and bring extra defenders down to shut down Jacobs, look for Derek Carr to make plays over the top with his deadly accuracy on deep passes.

The G-Men get some big-time help this weekend with Saquon Barkley and Evan Engram coming back to boost the offense. Meanwhile, the Cardinals may end up playing without star running back David Johnson, who has an ankle injury.

So why are we high on Arizona to come into New Jersey and knock off Big Blue? Mainly it’s all about the dynamic rookie, Kyler Murray, who has been phenomenal the past few weeks and is going against a Giants defense that is atrocious at defending the pass.

This game could feature a ton of offensive fireworks. Both Murray and Daniel Jones have exceeded expectations this year. Either could come away with the victory Sunday and it shouldn’t come as a huge surprise.

Okay sure, the Falcons can’t seem to stop anybody from doing whatever they want offensively these days. But then again, the Rams haven’t been scaring anyone with their defense, either. We’ll find out soon enough if the Jalen Ramsey trade really was a magic pill, or if Los Angeles’ defense just isn’t that great overall even with his star power on the corner.

What we do know is that Jared Goff has been a turnover machine during the Rams’ three-game losing skid. If the Falcons can generate some pressure up front going against Los Angeles’ porous offensive line, they could feast on the struggling young gunslinger en route to a much-needed victory at home.

If we’re being honest, this game will probably be one of the ugliest NFL Week 7 has to offer. The Titans are starting Ryan Tannehill, who has never ascended past being mediocre in this league. The Chargers come into the game limping, both literally (via the injury front) and figuratively, having won just one out of their last five games.

Tennessee’s offense is a mess. So there’s an opportunity for the Chargers to get back on track.

If Los Angeles can get creative with its offensive game plan and take advantage of Austin Ekeler’s immense skill as a receiver, this game is winnable. Philip Rivers will be under pressure but a nice mixture of deep throws to Keenan Allen and Co. mixed in with a strong screen game could get the Titans to make some key mistakes.

The Saints are seriously depleted on the offensive side of the ball. Alvin Kamara, Jared Cook and Tre’Quan Smith are all out for this Sunday’s game against Chicago. That puts pressure on Teddy Bridgewater in a big way. But he’s responded to every challenge he’s faced this year with excellent, measured play from under center. Offense shouldn’t be a problem for New Orleans.

The reason we’re high on the Saints to beat the Bears is that New Orleans’ defense has played much better the past few weeks. Mitch Trubisky is expected to start for the Bears, and he’s prone to making some rather silly mistakes still in his young career. If Cam Jordan and the guys up front can wreak some havoc, we expect Marshon Lattimore and the defensive backs to come up with some turnovers.

Like the Rams, the Dallas Cowboys started the season hot and have fizzled in a bad way since Week 4. Losers of three straight, the ‘Boys have a lot of problems, not the least of which is the health of the offensive line.

Now, it’s been reported that La’el Collins and Tyron Smith are expected to play, but they’re still not 100%. This means Philly can get after Dak Prescott, who took a hell of a beating in Week 6 playing against the New York Jets.

This game is a huge opportunity for the Ealges to seize control of the NFC East. Carson Wentz hasn’t played as poorly as his numbers suggest. If he gets some help from his defense on Sunday night, then the Eagles should fly high and upset their rival on national television.