Six NFL quarterbacks who were winners and losers this week

This was a tumultuous week in the NFL that brought several quarterback storylines to the forefront.

With many training camps getting underway and other news headlines breaking, here’s a look at six quarterback winners and losers from this week in the NFL.

Jackpot! Wilson signed a generous extension with the Seahawks on Friday which was the deadline he earlier set this week to either come to terms or shut down negotiations until next year. Wilson’s new four-year deal is worth $86.7 million and includes a massive $60 million in guarantees.

Somewhere it is 5:00 and champagne corks are surely popping for those in Wilson’s camp.

The second-year quarterback is reportedly struggling to get out of the gate so far in training camp. According to Pat McManamon of ESPN, “Manziel’s first four dropbacks went like this: sack, sack, pass nearly intercepted, pass batted down at the line.”

Despite earlier reports that the Browns are not ruling Manziel out as a starter, it sounds like the young quarterback has a long way to go after reading this news. 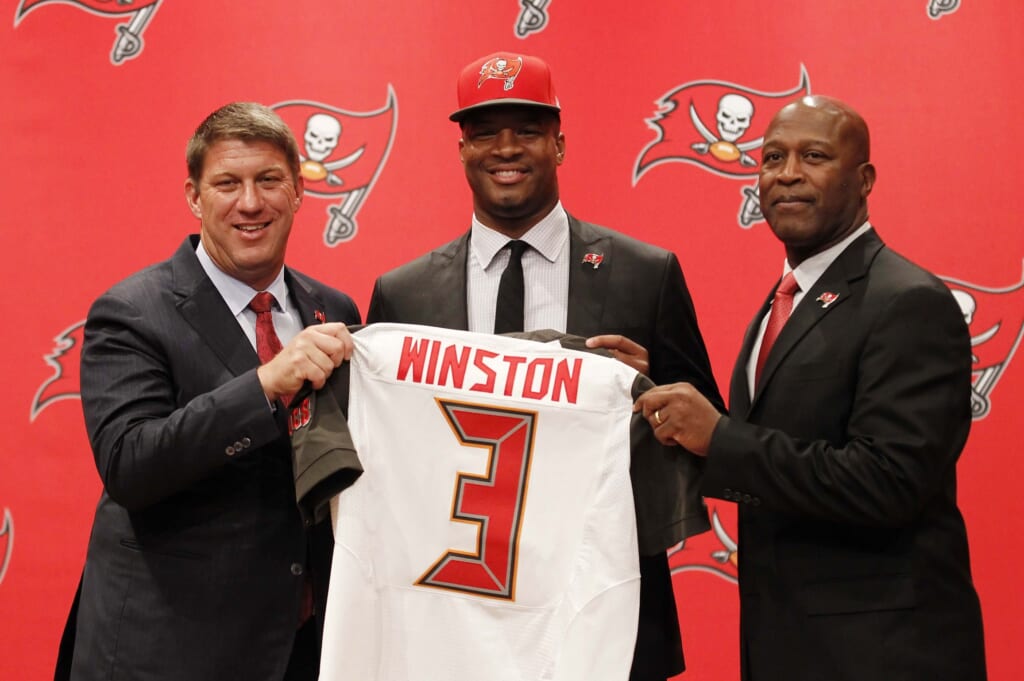 So much for the rookie having to “earn” the starting job this summer.

Winston, who threw his first training camp pass on Saturday, has already been named the team’s starter by head coach Lovie Smith. Let’s hope this sudden news (something that we knew would happen eventually over the course of the next few weeks) does not go to Winston’s head.

How would you like to be named the worst starting quarterback in the NFL? That’s the honor Smith earned on Wednesday according to a poll conducted by ESPN (h/t nypost.com).

How did Smith handle this disturbing news? He did all one could do in the situation and brushed it off:

Sadly, the poll ranked the third-year starter behind the likes of Josh McCown, Matt Cassel and Brian Hoyer. Over his first two NFL seasons, Smith has tallied 34 interceptions to 25 touchdowns.

According to teammate Brandon Graham, the veteran quarterback is going to make the team and play a lot. At least this makes it sound as if Tebow is a winner right now. The fact that Tebow is receiving praises rather than negative comments as training camp gets started is a good thing.

Tim Tebow has been training like a mad man to resurrect his NFL career: http://t.co/Ye5nqOpHfK pic.twitter.com/pERVVqE1AX

We’re not sure if we can take Graham’s word to the bank just yet, but Tebow should keep aiming to impress his team.

Just when we thought we may hear a ruling on Brady’s appeal that perhaps would reduce his four-game suspension, the complete opposite happened. The “you know what” hit the fan when news broke that Brady allegedly destroyed his cell phone right after the Ted Wells investigation began to take place. News of Brady’s destroyed cell phone nearly broke Twitter and the internet on Tuesday.

However, given Brady’sds luck, somehow he will manage to turn this situation into a winning one. Isn’t that what he always does?

Some of these quarterbacks will be enjoying their weekends much more than others will.