The 2017 NFL season is in full swing and there are some obvious situations around the league that are almost too painful to watch. Topping the charts in the troublesome category are three teams still unable to pick up a win. Most had the New York Jets pegged as the franchise most destined to fail at the start of the season. Instead, will cover the real nightmare in New Jersey.

On the other side of the ledger, seemingly healthy players are not helping their teams out one bit. A couple of veteran quarterbacks have looked more like rookies than the seasoned signal callers they are.

Is it too late to turn things around in Arizona? The Cardinals added an older running back, with much to prove, to a roster containing some of the oldest players in the league. Will this desperate move pay off?

This will unfold soon enough. For now, here are six of the biggest dumpster fire situations in the league.

Jay Cutler: It is time to panic

When are the Dolphins going to fess up and admit they made a huge mistake signing Cutler? In four games, the Dolphins’ offense has tallied a meager 41 points. For comparison’s sake, the Kansas City Chiefs just scored 42 points in their Week 5 game.

Cutler’s job may be safe for now simply because the Dolphins managed to win their last game. But the win did come against a Tennessee Titans squad that was missing its starting quarterback. Things will not come easy on the road against the Atlanta Falcons up next. While we are still waiting for Cutler to thrive with his former coordinator and now head coach Adam Gase, fans are chanting for Matt Moore to play. Gase defended Cutler not that long back, but soon after, threatened players failing to do their jobs.

Through four contests, Cutler has passed for only 706 yards and thrown three touchdowns as well as three interceptions. His quarterback rating is 74.8. If Smokin’ Jay keeps choking, the Dolphins will be in line to lose a lot more than they win for the remainder of the season. Heck, the team might actually call on backup Matt Moore.

What, if anything, has gone right for Eli Manning and the Giants so far? Absolutely nothing. The winless G-men just suffered the ultimate of gut-punches, losing star wide receiver Odell Beckham Jr. for the entire season. Watching Beckham suffer a broken ankle after seeing three other Giants receivers depart in Week 5 due to injuries was absolutely devastating. In addition to OBJ being done, the Giants also lost Brandon Marshall and receiver/return specialist Dwayne Harris for the season. Second-year wideout Sterling Shepard tops the depth chart as the team’s No. 1 receiver. But, he too was injured and his outlook for Week 6 looks grim, according to ESPN’s Jordan Raanan.

Next on the Giants schedule is a tough road game at the Denver Broncos followed by a home game against the Seattle Seahawks. Is it Week 17 yet?

Big Ben, we have a problem 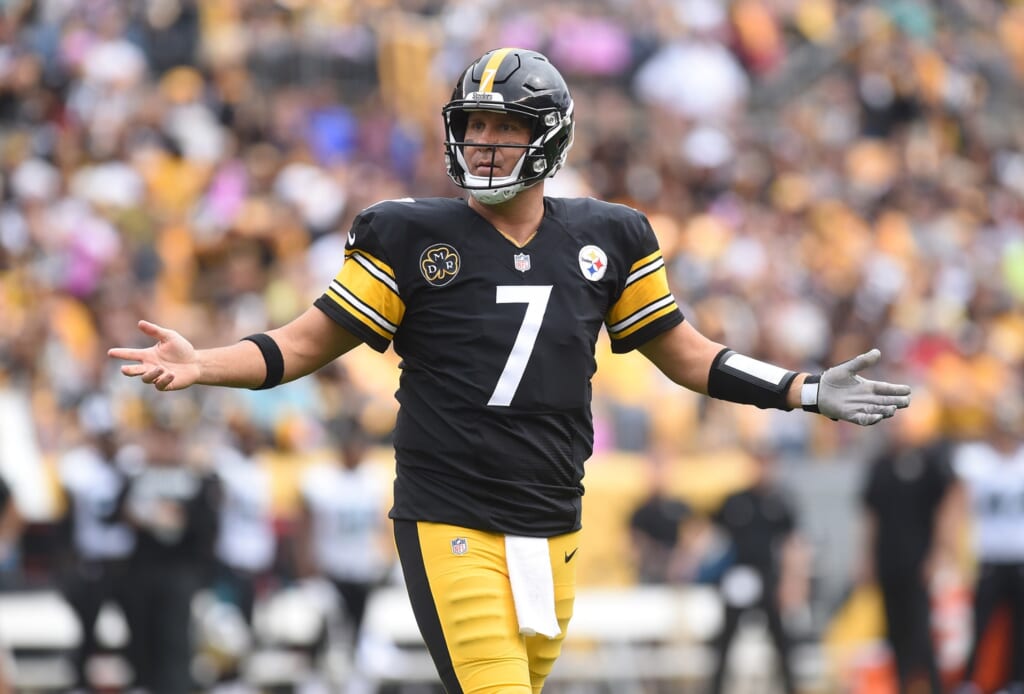 Speaking of struggles, Pittsburgh Steelers quarterback Ben Roethlisberger just laid a complete egg in Week 5. He threw a horrifying five-interceptions, two of which turned into pick-sixes. Needless to say, the Steelers lost to the Jaguars at home by the score of 30-9.

It was enough of a dumpster fire performance that the Steelers should legitimately be worried about their veteran signal caller’s capabilities. After the game, Big Ben had a disturbing admission.

“Maybe I don’t have it anymore, he said, via Aditi Kinkhabwala of NFL Network.”

Is Roethlisberger indeed washed up or did he just have a bad game? To date, the Steelers have a 3-2 record and Roethlisberger has thrown just six touchdowns compared to seven interceptions. He is also completing only 61.5 percent of his passes which marks the lowest of his career since 2010.

Roethlisberger and the offense overall are just not the fine-tuned machine we watched last year. This might well be Roethlisberger’s final season if he continues to unravel.

The 49ers are building for the future. A future that might not be seen anytime in 2017. The team’s defense is allowing the third-most yards (366.4) on average per game. On offense, the 17.8 points this team is averaging simply won’t get it done.

Quarterback Brian Hoyer is surely not the long-term solution. But San Francisco made its bed by picking him up in free agency while failing to add a signal caller early in the 2017 NFL Draft. So Far, Hoyer has thrown four touchdowns compared to four interceptions and is completing less than 60 percent of his pass attempts.

Securing points is a huge issue and it is a major red flag that kicker Robbie Gould has scored 42 of the 89 total points the 49ers have on the books. The 49ers rank 31st in third-down conversions and have managed to complete only 29.7 percent of their opportunities.

A stretch of tough opponents next, including a road game against the Washington Redskins and home matchup against the Dallas Cowboys, awaits the team. It also does not help that the 49ers do not get a rest until their Week 11 bye. Ouch.

The Cardinals (2-3) look like a team that cannot recover from losing running back David Johnson in Week 1. But, they need to if they want any shot at playing in the postseason. In a desperate move to revive an anemic run game, the team traded for veteran rusher Adrian Peterson. Though, expecting miracles from the 32-year-old running back, playing with the Cardinals shoddy offensive line, would be a stretch.

To this point, the Cardinals are the lowest-scoring team in their division, averaging just 16.2 points per game. Meanwhile, the team is giving up 25 points on average each week. The touchdowns are too few and far between with only six passing and one rushing score on record through five games. We touched on Arizona’s problematic offensive line. It has sadly allowed quarterback Carson Palmer to be hit a league-high 50 times. No quarterback at the age of 37 deserves this. 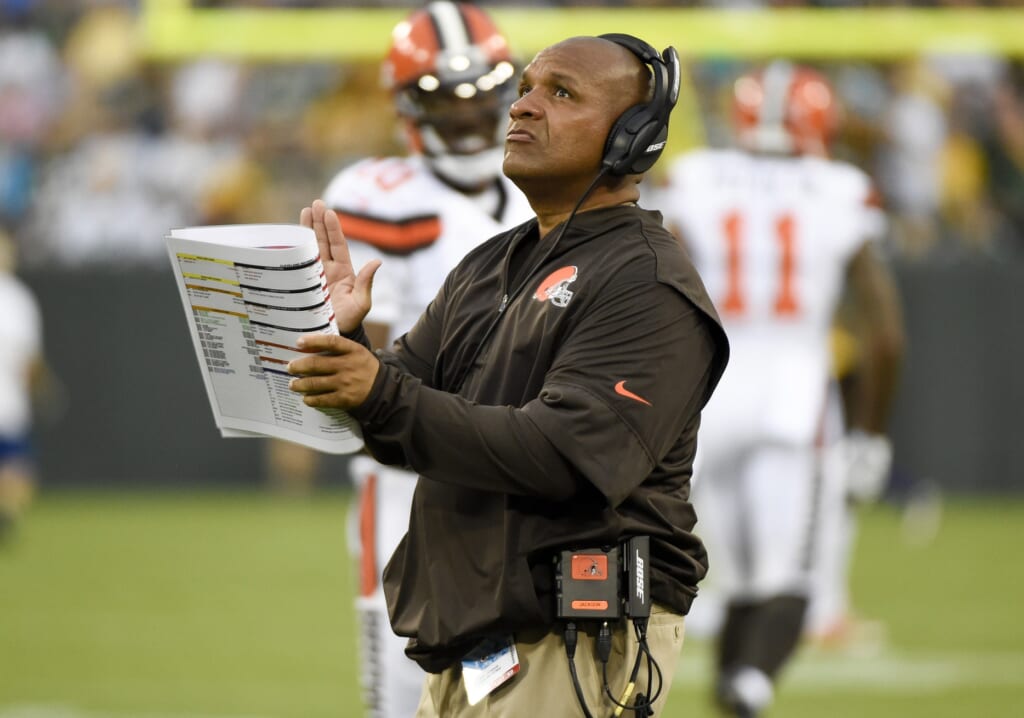 The Browns have one measly win in their past 23 games. Last year’s woes have clearly spilled into this season. After showing promise in the preseason, the Browns committed to rookie DeShone Kizer as their starter through both the good times and the bad. Well, it has been all bad so far for the young rookie. And head coach Hugh Jackson has since reneged on his commitment.

Kizer was thrown to the wolves and it shows. He has committed 11 turnovers compared to five total touchdowns and has completed a mere 50.9 percent of his passes. As a result, Jackson did what he does best — switch quarterbacks. Second-year quarterback Kevin Hogan has since been called to duty and will start in Week 6. But, what happens when Hogan fails to bring home the wins? Perhaps the team takes a gamble with third-stringer and last season’s starter, Cody Kessler.

How many more seasons will the Browns continue to play the quarterback shuffle? We can bet that secretly the franchise is kicking itself for trading the draft pick to Houston that landed the Texans Deshaun Watson.

The burning question is not when the Browns will win this year, but if they will manage a victory.