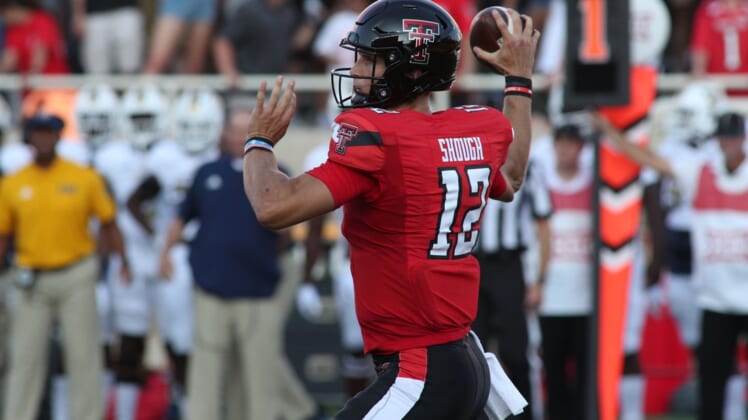 Might be safe to deduce that the Texas Tech offense is starting to find a comfort zone at just the right time.

In the final game before the Red Raiders embark on the Big 12 Conference season, quarterback Tyler Shough delivered the best game of his debut season with 399 passing yards and four touchdown passes to spark a lopsided 54-21 victory against Florida International in Lubbock.

Texas Tech piled up a season-best 582 total yards, with Shough dissecting the Panthers in the second and third quarters when his team scored 37 points to turn a close game into a blowout.

The Red Raiders (3-0) shook loose from a tight game after the first quarter with four touchdowns in the second period and racked up 264 yards along the way.

The Panthers (1-2) blended inside power runs by D’vonte Price and deep throws by Max Bortenschlager to piece together an 88-yard drive and went up 7-0 when Price bulled in from 3 yards out.

Meanwhile, Texas Tech’s offense scuffled. The Red Raiders’ first two possessions ended in punts, and when they forced FIU into a three-and-out, returner Adrian Frye muffed the ball to give it right back to the Panthers.

The game changed on the next snap, though, when Texas Tech defensive back Marquis Waters picked off a Bortenschlager pass, found daylight on the sideline and dashed 72 yards for a touchdown return.

FIU drove into field-goal range on the ensuing possession, but Chase Gabriel’s kick was wide left and the Panthers never recovered, thanks in large part to Texas Tech’s offense coming to life.

With a reprieve and the score still tied 7-7, the Red Raider offense kicked into gear with four consecutive touchdown drives in the second period covering 80, 75, 68 and 61 yards. Shough completed 12-of-13 passes in that span for 217 yards and touchdowns to Travis Koontz twice and Trey Cleveland. Tahj Brooks rushed for the other score.

Texas Tech continue to move the ball after halftime, sandwiching a field goal and touchdown around FIU’s third TD. Backup quarterback Henry Colombi took over and engineered the final scoring drive, which he finished with a 19-yard scamper.