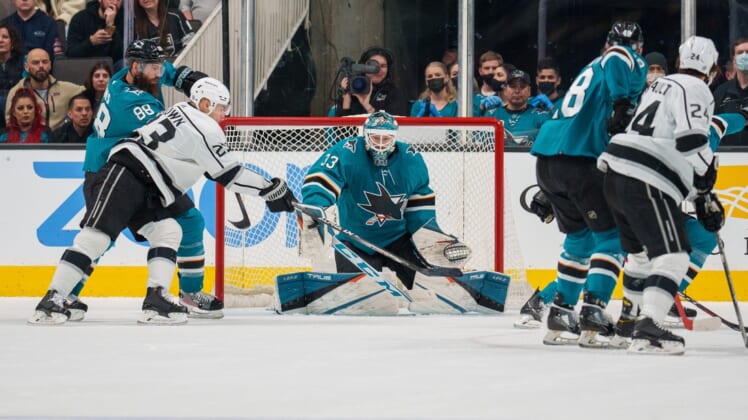 Timo Meier had a goal and two assists, and Tomas Hertl scored twice as the San Jose Sharks beat the visiting Los Angeles Kings for the second time in three days, 5-0 on Saturday night.

Sharks goalie Adin Hill made 29 saves — his first action in nearly two months — for his second shutout of the season.

Matt Nieto and Jonathan Dahlen also scored while Nick Bonino and Brent Burns each had two assists for the Sharks, who snapped an 0-2-1 rut with Thursday’s 4-3 overtime win at Los Angeles.

Hill had been dealing with a lower-body injury that kept him off the ice since Jan. 22. He was solid enough to snap an 0-2-1 starting stretch and record his first shutout since Oct. 19.

San Jose has won back-to-back contests for the first time since a three-game run Jan. 6-11. The Sharks have also outscored Los Angeles 11-2 during two home wins on the season series.

Cal Petersen was roughed up early, allowing three first-period goals, and finished with 22 saves for the Kings, who have dropped back-to-back games after winning eight of 10. Blanked for the fifth time this season, Los Angeles also had its three-game road winning streak come to an end.

San Jose opened its scoring account on the power play.

At the 9:19 mark of the first, Meier, who recorded five goals during his team’s 6-2 home victory over Los Angeles on Jan. 17, converted after the puck went through the legs of Hertl and on to his stick.

A little more than two minutes later, Nieto benefited from a Kings turnover in their own end to make it 2-0.

Dahlen increased the Sharks’ advantage when he was perfectly positioned to push the puck through Petersen’s legs with 49 seconds remaining in the opening frame.

Hertl eventually got the puck on his stick and converted after Meier’s shot hit the post, then off a Kings player at the 8:05 mark of the second period. Hertl’s late goal tied Meier for the team lead with 25.