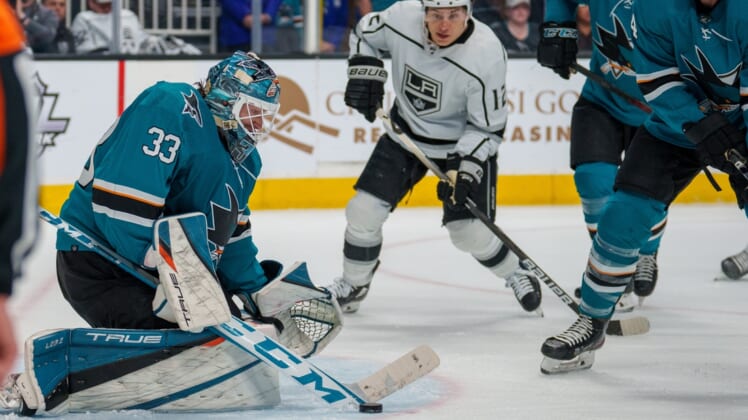 Before the Los Angeles Kings can dream of making a deep run in the Stanley Cup playoffs, they need to prove they can defeat the San Jose Sharks.

The Kings will attempt to avoid a four-game season sweep by the Sharks when the Pacific Division rivals meet at Los Angeles on Thursday night.

The Kings are in second place in the Pacific Division and San Jose sits in seventh, however the Sharks have gotten the better of Los Angeles in head-to-head play. They breezed to a 6-2 win over the Kings at San Jose on Jan. 17, and then won back-to-back home-and-home games versus Los Angeles last week.

The win on Saturday was a 5-0 rout, San Jose’s most one-sided victory since defeating the Montreal Canadiens by the same score on Oct. 19.

The Sharks also won six of eight against the Kings last season. San Jose is 26-11-0 against Los Angeles over the past seven campaigns, including a five-game series win in the first round of the 2016 Stanley Cup Playoffs.

“Obviously our next opponent, we haven’t had a lot of luck against, and haven’t played well against,” McLellan said following a 3-0 loss to the visiting Colorado Avalanche on Tuesday. “Maybe that will get us jacked up a little bit.”

The Sharks will be trying to earn at least a point in five straight games for the first time this season.

After their two-game sweep against the Kings last week, San Jose lost 3-2 in overtime to the visiting Florida Panthers on Tuesday. Florida had an 18-3 advantage on shots after the second period as the Sharks failed to preserve a 2-1 lead.

“We did enough good things to get a point,” Sharks coach Bob Boughner said. “Could have easily had two.”

The Kings on Tuesday played without the six defensemen who played in the season opener.

The Kings most recently lost defenseman Tobias Bjornfot to a lower-body injury in a 3-2 shootout win against the Panthers on Sunday.

Los Angeles has been forced to supplement its roster with several players from its American Hockey League affiliate in Ontario (Calif.).

“We believe in the group that’s here,” McLellan said. “As they keep falling out, it gets tougher. As you get deeper in the batting order and guys end up playing significantly more minutes against opponents they normally wouldn’t play against, that catches up with you after a while.”

The Kings could use some production from what used to be its best line.

Captain Anze Kopitar has been held off the scoresheet in each of his past six games, and Alex Iafallo has one point — an assist — in his past nine games.

San Jose center Logan Couture scored his 20th goal of the season on Tuesday. He enters the game against Los Angeles on a four-game point streak (two goals, two assists).