Shane Bieber, Guardians on rise ahead of another meeting with White Sox 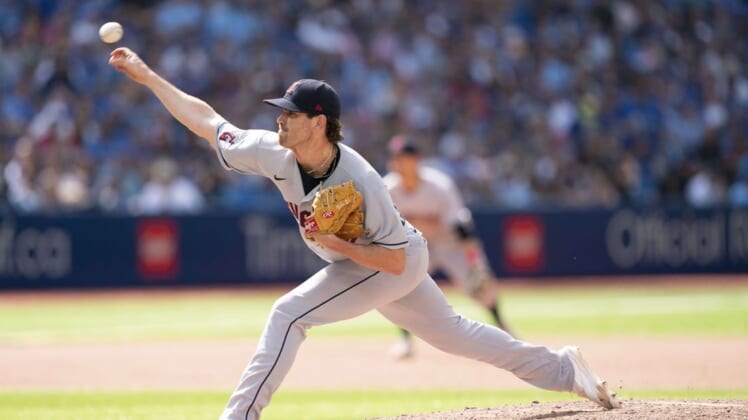 Shane Bieber and the Cleveland Guardians will aim to continue their winning ways on Saturday evening when they host the Chicago White Sox in the second contest of a three-game series.

Bieber (8-6, 3.18 ERA) matched a career high by winning his fourth straight start on Sunday after allowing two runs in seven innings during a 7-2 triumph over the Toronto Blue Jays.

Guardians manager Terry Francona said Bieber possessed his best fastball of the season, and that compliment put a smile on the face of the 2020 American League Cy Young Award recipient.

Bieber, 27, has allowed five runs and struck out 30 against three walks in his last 27 innings.

He also has enjoyed success against the White Sox. Bieber is 7-3 with a 2.75 ERA in 15 career starts against them, including 2-1 with a 3.43 ERA in three encounters this season.

As for the Guardians, they recorded their 10th win in the past 13 games overall and ninth in 14 meetings vs. Chicago this season with a 5-2 victory in the series opener on Friday.

Cleveland’s Jose Ramirez hit his team-leading 23rd homer of the season in the sixth inning. He has five RBIs in the past three games, giving him 99 for the season.

While Cleveland has ascended to the top of the AL Central, Chicago has dropped three in a row following a five-game winning streak.

Although the results haven’t been favorable of late, White Sox pitcher Lance Lynn said his team isn’t going to get too low after the latest setback.

“You are not going to win every one of them,” Lynn said. “If you beat yourself up over every loss, then it’s going to be a long season. We haven’t done that thus far, so we don’t plan on doing it now.”

Right-hander Johnny Cueto (5-5, 2.78 ERA) will get the start for the White Sox on Saturday.

Cueto, 36, allowed two runs (one earned) on six hits in eight innings of a 4-2 victory over the Houston Astros on Monday.

He sports a 4-0 record with a 2.48 ERA in eight career meetings with Cleveland. Cueto received a no-decision in his lone encounter vs. the Guardians this season after permitting four runs (three earned) in seven innings on July 23.

Whether Cueto faces Austin Hedges on Saturday is uncertain. The Guardians’ catcher exited the series opener in the fifth inning due to a sprained right ankle after he slid into Cleveland’s dugout while chasing a wild pitch.

“He’s actually doing pretty well,” Francona said of Hedges after the game. “He came in hard. … You could see where his spike marks went over a metal grate, and he felt like a pop. And when he went out to catch, he didn’t think he could move to block a ball. (But) he already says he feels pretty good.”