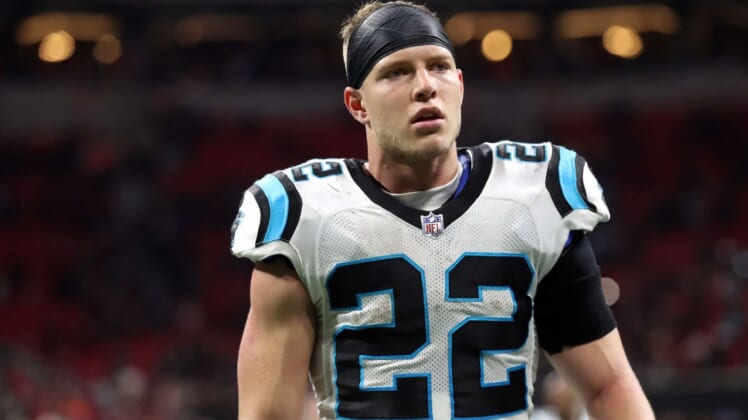 There were five preseason NFL games on the slate Friday night, and we saw some outstanding individual performances, especially from a handful of young bucks.

Two rookie quarterbacks caught our eye. A second-year gunslinger who needed redemption found it. A couple of running backs blew our socks off, and a defensive end gave his new team a taste of what’s to come.

These seven players stood out as the most impressive players from Friday’s preseason action.

McCaffrey touched the ball nine times and gained 120 yards. That’s insane. He ripped off a beautiful 71-yard touchdown run, leaving Miami Dolphins defenders in the dust (watch here), adding another 21 yards on four other carries while catching four of five targets for 28 yards.

The Panthers should envelop McCaffrey in bubble wrap for the remainder of the preseason after what he did on Friday night against the Dolphins. There’s no need to get him acclimated to the speed of the game — defenders have to get acclimated to him, more like — and it’s clear that he’ll be a huge key to the team’s success in 2018. 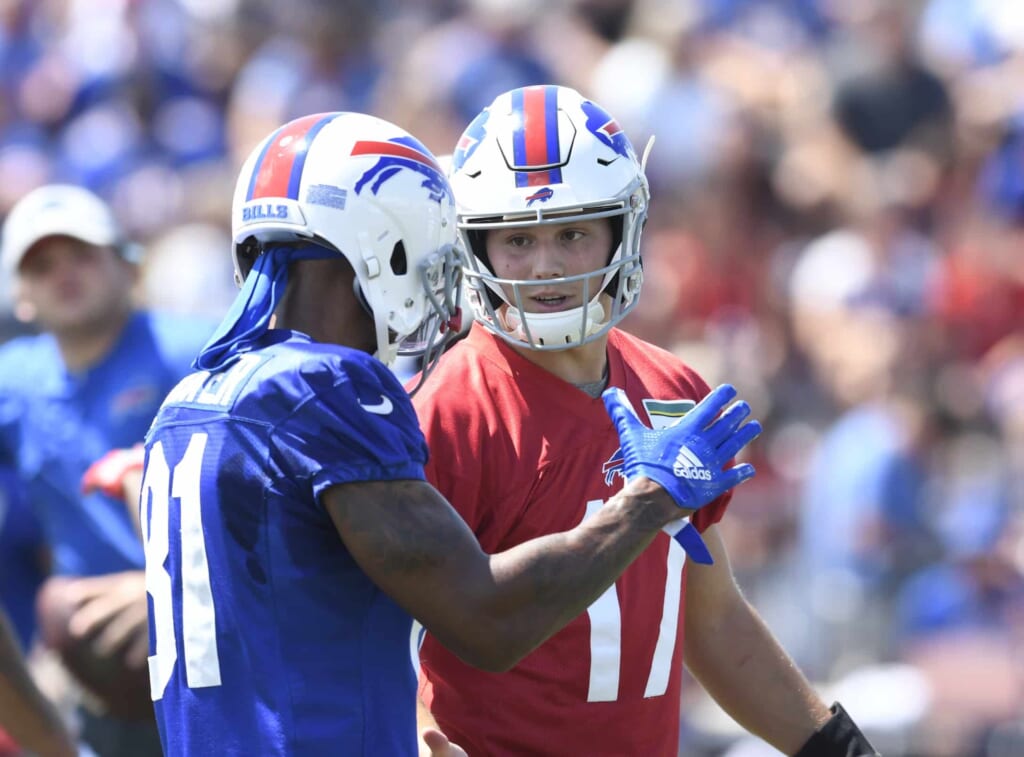 When you see 60 yards on the stat sheet, it’s easy to dismiss what Josh Allen did against Cleveland as nothing special. But if that’s your take, then I’d posit you did not actually watch him play. Because the rookie was darn impressive.

The Wyoming product didn’t make mistakes. He took what the defense gave him. And in the end, he completed 9-of-13 passes and threw his second touchdown of the preseason on a play that showed he’s maturing on the fly. Facing pressure in the red zone, he side-stepped a would-be tackler, kept his eyes on his receivers and delivered a strike to Rod Streater for six (watch here).

Allen is known for his strong arm. That’s the key factor that sets him apart from the other rookies in the league. But on Friday night he had an outstanding outing more because of his decisions and accuracy, rather than his gun.

The Dolphins have made some big changes to their defense recently. They got rid of Ndamukong Suh, for one. They also made a trade with the team Suh landed on for pass rusher Robert Quinn, who was once among the most dominant edge rushers the league had to offer.

If Friday’s action against Carolina was any indication, that trade-off will work in Miami’s favor. Quinn had two sacks in the game, looking explosive and quick off the edge. Though, it’s worth mentioning that he did go against Matt Khalil, who’s known for being less than stalwart in pass protection.

Still, two sacks in one half of play is always impressive, and we look forward to watching him work the rest of this season.

What a way to redeem yourself. Last week, Webb was all over the place, and it looked like the speed of the game was a bit too much. He ended up going for just 70 yards while completing just 9-of-22 passes.

On Friday night, starting with the first-team offense while Eli Manning sat the game out, Webb responded with perhaps his best showing as a pro. He was fully in control of himself and the offense, taking what the Detroit Lions gave him rather than pressing for big plays. The numbers speak for themselves, as Webb finished with 140 yards on 14-of-20 passing with one touchdown pass (watch here).

It was a very important step in the right direction for the second-round quarterback out of Cal. 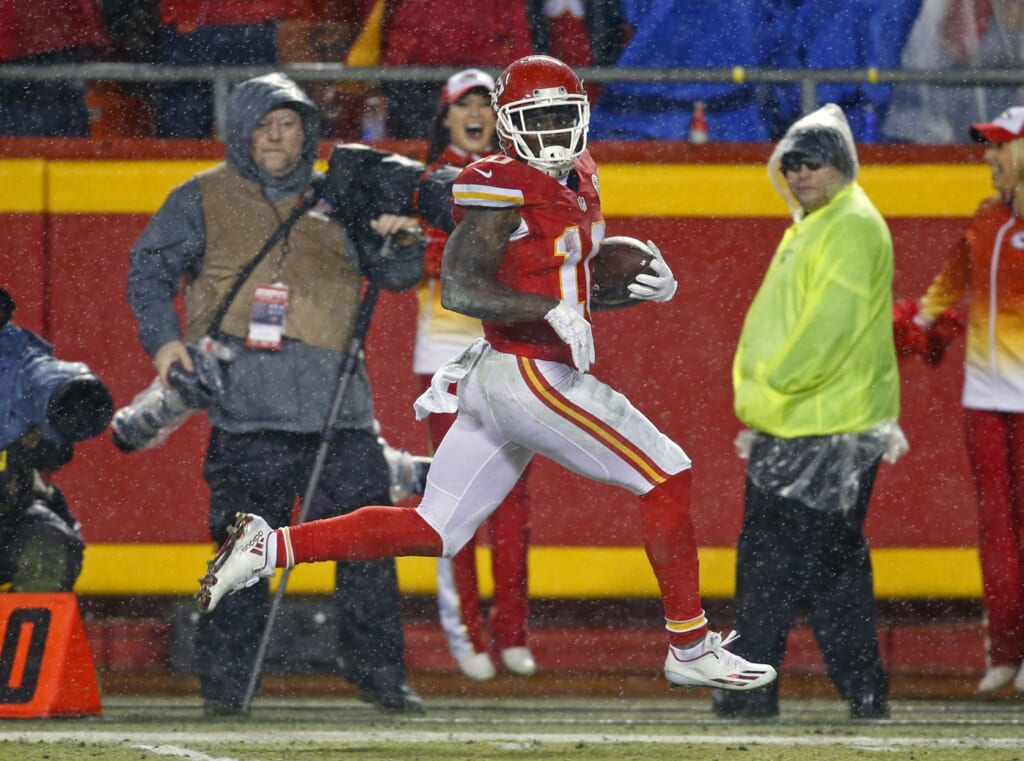 We all know how dynamic Tyreek Hill can be, but it never hurts to get the occasional reminder anyway. Fans tuning into the Chiefs’ road game against the Atlanta Falcons certainly got one in the second quarter.

Hill got behind not one, not two, but three Falcons defenders on a 69-yard touchdown pass from young Patrick Mahomes, who threw an absolute laser beam on this play (watch here). Hill finished with 87 yards and the touchdown on four receptions despite only playing one half. He’s going to be a handful as he continues to develop as a receiver in this league.

As an aside, it’s worth pointing out that Mahomes is still very much a work in progress. He wows, but he also threw an awful interception, telegraphing it into double coverage, and had a pass in the end zone that should have been picked but was dropped.

The Cardinals wanted to get their rookie quarterback into the mix with the starters on Friday night. After three drives with Sam Bradford at the helm, it was Josh Rosen time, and he did not disappoint.

The first-rounder out of UCLA was very comfortable going against the New Orleans Saints. Rosen completed 10-of-16 passes for 107 yards and a dart of a touchdown pass to fellow rookie Christian Kirk (watch here).

Rosen probably won’t do enough to unseat Rosen as the starter — the veteran was perfect on the night, after all. But he’s also giving the organization confidence that it did not make a mistake trading up to select him No. 10 overall this year. Rosen looks like the real deal.

Last week, Hyde was pretty much a forgotten man for Cleveland. He got just one carry in the team’s opener against the New York Giants, going for minus-one yard.

Needing to make a statement, Hyde came out and ran like his hair was on fire Friday night against the Buffalo Bills. Really, he looked like Marshawn Lynch in his prime. Hyde was absolutely putting the hurt on Bills defenders, and we know one of them in particular won’t be anxious for any more close encounters any time soon.

Hyde finished played much of the first half, finishing with 64 yards and a touchdown on nine carries. That’s the way to secure your starting job.